Out of the blocks: what Monerium’s e-money licence means for fintech

Earlier this year, the Icelandic start-up Monerium became the first European company to receive a licence to issue e-money over a blockchain network. Ultimately, this puts the firm in a strong position to influence the future of digital finance 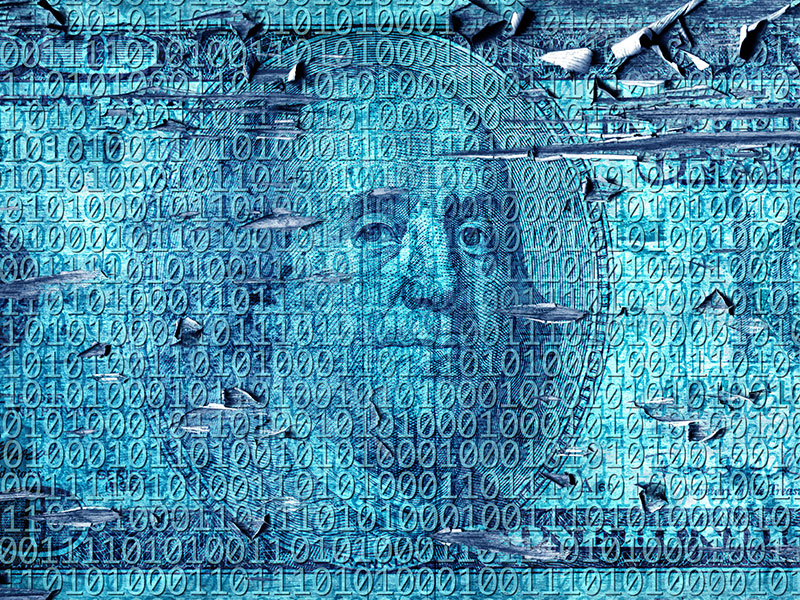 Although cash remains the most popular method of payment, reports of its demise are never far away. As such, the race is on for businesses to enter the alternative currency space
Finance

Since its release in 2009, bitcoin has captured the public’s imagination like no other development in the financial world. If the industry previously conjured up images of suits, ties and spreadsheets, then bitcoin replaced them with mysterious computer hackers, innovative start-ups and even criminal activity. Intrigue was also driven by the chance to get rich: bitcoin has experienced huge price spikes (and crashes) over the years, allowing some currency speculators to earn vast sums of money.

But while bitcoin has taken the headlines, it is actually the technology underpinning it that is likely to prove more important moving forward. Blockchain, the distributed ledger system that securely stores all of bitcoin’s transactional data and has subsequently been adopted by other cryptocurrencies, has also been used to support smart contracts, supply chain management and digital voting. Now, e-money can be added to that list.

In June, Icelandic fintech start-up Monerium became the first European company to receive a licence to issue electronic money over the blockchain. The decision gives the technology further legitimacy and suggests that, for all their hype, cryptocurrencies may not represent the future of money after all.

Bit of a let-down
Although e-money sounds like the latest disruptive technology set to shake up the finance sector, it has been around for a relatively long time. Quite simply, it is fiat money in digital form – an alternative to cash that exists on banks’ computer systems. It is used all over the world at any given moment to facilitate electronic transactions.

“E-money is a legal form of digital cash that is fully asset-backed, redeemable and supervised,” Monerium co-founder and CEO Sveinn Valfells told European CEO. “It is technically neutral and not tied to any specific electronic medium. E-money was first introduced in the EU in 2000, and there are tens of billions of euros of e-money in circulation in the eurozone, primarily as pre-paid cards.”

For all their hype, cryptocurrencies may not represent the future of money after all

Cryptocurrency, meanwhile, is an unregulated form of private money that exists as tokens on blockchains to serve a diverse range of use cases. Bitcoin, for example, is designed as an online payment token, while Ether is intended to pay for transactions on the Ethereum blockchain.

Not long ago, experts were signalling that nationally regulated currencies would eventually die out and be replaced by cryptocurrencies, but this has yet to take place. In fact, the number of practical use cases for cryptocurrencies remains small. While the amount of bitcoin received by top merchant processors increased steadily between 2015 and 2017, it has fluctuated wildly since; last year, several service providers, including Stripe and Expedia, stopped accepting the cryptocurrency at all.

By contrast, the amount of e-money issued by monetary financial institutions in the eurozone has grown every year since 2011, according to data from the European Central Bank. It is easy to see why its popularity is on the rise: unlike cryptocurrency, e-money is backed by a fiat currency and, as a result, is not subject to the same level of volatility. It is also extremely simple to understand and use: whatever amount of money an individual has in their regular bank account is the amount they have in their e-wallet.

Maybe crime does pay
While legislators are not quite sure how to get a handle on cryptocurrencies, the regulatory landscape for e-money is well established. Nevertheless, the level of trust in mobile wallets and pre-paid cards still has some way to go if it is to reach parity with traditional banks. For Monerium, the adoption of blockchain will help to improve this situation by adding another layer of security.

Blockchains are not infallible, and there has been some speculation that smaller networks could be particularly susceptible to attack

Additionally, every participant in the blockchain network has their own private key assigned to each transaction. And, as blockchains are decentralised, there is no single point of weakness for hackers to target. In order to successfully alter a blockchain and get away with it, an individual would have to access every node – or at least the majority of them – on the network and make the same changes at the same time. Again, this is a highly unlikely occurrence.

As well as providing security benefits, the ability to create e-money using the blockchain means individuals and businesses can use Monerium’s platform to send and receive money without the involvement of a financial intermediary, such as a bank. This will lead to some financial transactions being automated, providing huge efficiency benefits.

“Just like the world wide web gave rise to a new form of media on the internet, blockchains enable new types of online transactions for existing and new asset classes,” Valfells explained. “For example, atomic and programmable trading, and the settlement of securities and commodities around the clock. Such markets will not come about unless there is a reliable form of fiat money linked to blockchains – e-money is that link.”

Still, blockchains are not infallible, and there has been some speculation that smaller networks could be particularly susceptible to attack. Due to the computing power required, the website Crypto51 estimates that altering the majority of the nodes on the bitcoin blockchain for fraudulent purposes – known as a ‘51 percent attack’ – would cost in excess of $730,000 (€654,920) per hour.

For less popular blockchains, however, such barriers are not necessarily present. In January 2019, a hacker managed to steal $1.1m (€979,726) worth of the Ethereum Classic cryptocurrency by reorganising the network’s blockchain in such a way that they could spend the same coins more than once. Despite these concerns, the Monerium CEO believes it’s important that his firm is blockchain agnostic.

Unlike cryptocurrency, e-money is backed by a fiat currency and is not subject to the same level of volatility

“The technology is new and we want to support organisations that are starting to use blockchains to facilitate the adoption of the technology,” Valfells said. “Monerium believes blockchains can be used in many areas of e-commerce and financial services, and the diverse needs of global markets will require different types of blockchains.”

When bitcoin was released, it was the only blockchain around; today, that is no longer the case. Different use cases may require different types of blockchain, depending on transparency, speed, environmental impact and a host of other factors. For Monerium and other platforms adopting blockchain technology, security will obviously be important, but there certainly is good reason for taking a flexible approach while the field is still developing.

Modernising money
Although cash remains the most popular method of payment – in November 2018, the US Federal Reserve found that it was used for 30 percent of all US transactions and 55 percent of transactions under $10 (€8.91) – reports of its demise are never far away. As such, the race is on for businesses to enter the alternative currency space. Some major players are already involved.

In June, Facebook confirmed that it was creating its own global currency. Named Libra, the new digital token will be built using blockchain technology and enable users to send money via Facebook, Facebook Messenger and WhatsApp, as well as pay for products and services purchased online from selected third-party outlets. The key competitive advantage held by the currency is that it will be backed up by real assets in the form of the Libra Reserve. Interest earned on these assets will be used to cover operational costs, ensuring that users of the currency face low transaction fees.

Although Valfells is keen to stress that his company is not in competition with cryptocurrencies like Facebook’s Libra, these are important times for the nascent fintech sector. There has been a lot of hype, but not much progress among members of the public. As individuals continue to gradually transition away from cash in favour of digital transactions, a number of companies – not just Facebook and Monerium – will be looking to set the pace. The winner will need to strike a delicate balance between innovating and adhering to regulatory standards.

“Facebook’s new Libra blockchain project has the potential to be a big step forward towards a more global and inclusive financial infrastructure,” said US Congressman Darren Soto, who is also co-chair of the Congressional Blockchain Caucus. “We are encouraged by the possibility of increasing access to mobile and digital payments, which will ultimately benefit our society and become a driver of economic growth. While it is yet unclear how this new technology will be regulated, it is crucial Congress continues to protect consumers and the financial wellbeing of investors, while simultaneously promoting innovation for these virtual currencies.”

Facebook’s pulling power is obviously a huge advantage – both with members of the public and the corporate world. The social network has already managed to attract 27 other companies to join the Libra project, including eBay, Uber and Visa. But whether that will be enough to convince people to trust Facebook with their hard-earned cash remains to be seen. Mark Zuckerberg’s company has not exactly got a clean record when it comes to data privacy; it will have to do a better job concerning financial regulations.

World leader
Looking to the future, the fact that Monerium has obtained a licence from Iceland’s Financial Supervisory Authority is a significant step forward for the use of e-money across Europe. In order to receive the accreditation, the company did things a little differently from most fintech operators: instead of designing the technology first and then seeking regulatory approval, Monerium took a regulation-first approach, basing its technology on existing legislation.

“Acquiring an e-money licence required a concentrated and sustained effort by a team of people who have previously served in leading roles in asset management, central banking, IT [and] regulatory institutions, and who had helped prepare other licence applications,” Valfells explained.

Initially, Monerium’s services will only be available in Icelandic króna, but additional currencies will be made available in the second half of this year, or at some point during 2020. Crucially, as Iceland is part of the European Economic Area, the company has access to a huge market of some 520 million people.

For now, it appears to be advantage Monerium, but the decision to grant an e-money blockchain licence could also prove to be a big win for Europe more generally – particularly given that so many of the world’s recent tech developments have come out of Silicon Valley. If Monerium can further the growth of e-money across the continent while also bolstering the fledgling blockchain economy, then the company could play a leading role in the continuing digitalisation of money across the globe.