A century of dreaming

Despite never taking interest in commercial success, Carl-Henning Pedersen produced a vast and compelling body of work in his lifetime: worthy of a centenary show, finds Jo Caird 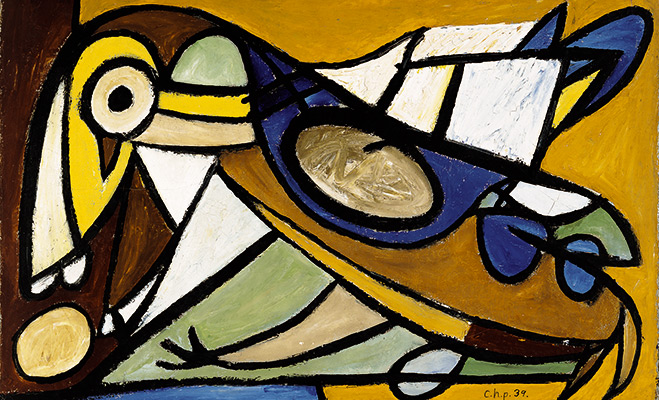 Immediately before the outbreak of the Second World War, a young artist named Carl-Henning Pedersen travelled from his native Denmark to Paris, curious to experience the work of his major European contemporaries. With barely a penny to his name, he had no option but to undertake the journey on foot, sleeping in haystacks along the way and only just making it back across the Danish border before the war began. This story may appear improbably romantic, but not only is it true, it also offers a route into understanding that rarest of characters: a genuine dreamer.

To commemorate what would have been Pedersen’s 100th birthday, and to educate the world about the man known as the ‘Scandinavian Chagall’, the ARKEN Museum of Modern Art in Copenhagen is bringing together over 200 of the late artist’s works for a retrospective this spring. This major international show – the first since his death in 2007 at the age of 94 – will include oil paintings, watercolours and sculptures in bronze.

Danish dreamer
Born in Copenhagen in 1913, Pedersen was introduced to a painting by Else Alfelt, a self-taught painter he met while studying at the International Folk High School in Elsinore. He and Alfelt married in 1934 and Pedersen was exhibited for the first time two years later at the artists’ Autumn Exhibition in Copenhagen.

His early work leant towards abstraction, but soon exposure to artists such as Paul Klee, Marc Chagall and Pablo Picasso, as well as an exploration of the aesthetic of Nordic mythology, led Pedersen to adopt a softer, more figurative approach. In 1948, he became involved with CoBrA, a movement led by a group of artists from Copenhagen, Brussels and Amsterdam, inspired by the ideals of Marxism.

The group wanted art – both the making and viewing of it – to be accessible to everyone, irrespective of race, class, age or education, and emphasised the importance of spontaneity and fantasy in artistic practice. Pedersen was a leading member of the movement, but while his compatriots theorised about the role of art in society, this “dreamer” kept the focus on the art itself.

As Christian Gether, Director of ARKEN and the curator of the retrospective describes: “When they were talking politics, he would make watercolours… he was an inspiration for the other CoBrA artists because he had this – childish is the wrong word – but this almost naïve approach to art. He wasn’t calculating, he wasn’t planning, he wasn’t doing all that. He was just formulating on the paper, on the canvas, what he was thinking, what he was imagining.”

Art for all
The motifs beloved by the CoBrA movement – including birds, fantastic animals, masks and figures from mythology – remained central to Pedersen’s artistic practice throughout his life. A good example is the 2005 watercolour Charon’s boat, completed shortly before the artist’s death and part of a hidden cache of watercolours discovered by his widow. The work, which is being exhibited for the first time at the ARKEN show along with 14 other unseen watercolours, references the ferryman from Greek mythology who transports the souls of the dead to the underworld.

Pedersen represented Denmark at the Venice Biennale in 1962 and was inundated with offers from galleries around the world, inviting him to exhibit. But Pedersen had no interest in self-promotion or anything else that would take him away from making art. Gether, who worked with Pedersen on a 1998 ARKEN exhibition that put the Dane’s work alongside that of Marc Chagall, visited the artist at home in Burgundy on several occasions in the years leading up to his death.

Gether recalls Pedersen with fondness, describing him as “a very sweet, very kind, very poetic man”, but “single-minded” in his approach to his work. It was this unwillingness to compromise that meant that, although Pedersen is represented at respected art institutions including the Pompidou in Paris and MOMA in New York, he remains something of a marginal figure, at least outside Scandinavia.

This show, Gether hopes, may change that, as ARKEN publishes a major catalogue to accompany the exhibition, containing new research into Pedersen’s life and artistic practice. Whatever the wider impact of the show, the fact it is taking place at all would undoubtedly have been a source of pleasure to Pedersen.

As Gether explains: “He had this attitude that people should come and see his art works and be elevated from daily life into a universe of spontaneity and fantasy and dreams and happiness… he wanted to be in dialogue with people. It made him happy when he saw that people were looking at his art.”

Carl-Henning Pedersen is running at the ARKEN Museum of Modern Art, Copenhagen, Denmark, from February 2 to August 11. www.arken.dk