In Oslo’s most cutting edge district, Shard-designer Renzo Piano has created a fresh home for the Astrup Fearnley Museet. Jo Caird discovers what the new-look museum has to offer 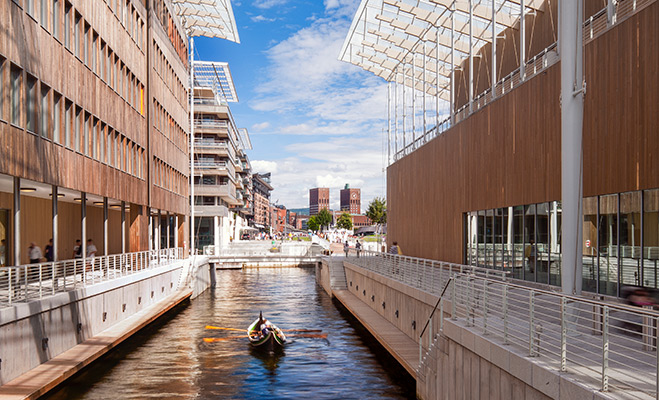 One month before the opening of the new Renzo Piano-designed home of Oslo’s Astrup Fearnley Museet, I am sitting in the late August sunshine on a balcony outside what will soon be the museum’s boardroom. Below me on one side is the Oslofjord, its sparkling waters lapping the pebbles of a city beach – Norway’s first. To my left a canal – also new – bisects the €88m building, while above the museum’s sail-like roofs soar, connecting the two exhibition spaces.

Speaking loudly to penetrate the noise of the building works which are currently ringing out across the site, Gunnar B Kvaran, Director at the Astrup Fearnley since 2001, is talking excitedly about how this striking building will transform the way the privately-owned museum is regarded by the public. With 32 years in the art game the Icelandic art veteran knows this industry inside-out, and he has reason to be excited.

“For the first time [people] will be able to see, feel and understand that we have a collection, because the collection up to now has been quite abstract, nearly mythological. Now people will be able to see what we have been up to these last years and experience it on a long-term basis. And what is important when you have an institution like this, the city, the people, and visitors from abroad and locally, have a certain kind of symbolic ownership to the collection. They appropriate the museum, they appropriate the collection as a part of their artistic experience.”

American theme
The Astrup Fearnley was established in 1993 by Norwegian shipping heir and entrepreneur Hans Rasmus Astrup, whose family have a long history of art collecting. The bulk of the 1,500-strong collection is made up of large-scale American works from the 1960s to the present day, with the museum’s most famous piece being Michael Jackson and Bubbles (1988), a life-size ceramic sculpture by Jeff Koons bought in 2002 for $5.1m.

Perhaps the most surprising thing about a collection on this scale is the relatively small number of artists represented. Kvaran explains that he and Astrup, the museum’s chairman, are not interested in “illustrat[ing] some kind of historical movement or survey” – they leave that to other museums. Instead, the aim is to identify a limited number of artists with “a central position in the development of contemporary art in general”, and collect them in depth.

The move to the new building in fjord-front Tjuvholmen gives the museum an additional 2,800sq m of exhibition space on top of the 1,200sq m available at the Astrup Fearnley’s former premises in the heart of Oslo’s business district. Nevertheless, it is still only possible to display 20 percent of the collection at a time, so there will be what Kvaran calls “a slow turnover” of works. This is set in contrast to a dynamic temporary exhibitions programme with three strands: “ambitious regional exhibitions” such as the Contemporary Brazilian Art, opening in September 2013; retrospective or thematic exhibitions focusing on established arts, such as Cindy Sherman, coming on May 4; and shows by emerging players such as video artist Paul Chan, which also opens this year.

Whereas Oslo’s major public art museums focus on “representing Norwegian national treasures and contemporary art in dialogue with the international arts scene,” Kvaran says the Astrup Fearnley is a “museum of international contemporary art in dialogue with the Norwegian arts scene”. But it’s not just through the arts scene that the museum seeks to anchor itself in its local environment: Kvaran is personally “very preoccupied” with the role that the museum can play in education, citing the institution’s team of voluntary mediators in communicating with the public.

The museum building itself is also crucial when it comes to the Astrup Fearnley defining itself as a Norwegian institution. Kvaran is delighted by how architect Renzo Piano has responded to the location on the Oslo waterfront. “When we saw the plans,” he says, “we saw that this was not just another building – it was absolutely a new concept, a building inspired by the site and anchored into the location, into the fjord, into the sky, into the boats, into the birds.”

A mixed response
Critical response to the project has so far been mixed, and a number of commentators have remarked on a feeling of safeness about the building and an overly corporate mood to the collection. Such a reception must be a source of disappointment to Kvaran and his team, but perhaps they shouldn’t be surprised by this reaction. The circumstances of the building’s creation as part of the new Tjuvholmen development were unashamedly commercial. It was only after the bid was won that the Astrup Fearnley was approached about the project; the gallery space was dreamt up in abstract as part of a plan not just to regenerate an area, but also turn a profit for the developer. If the process feels commercial rather than creative and organic, it’s because it is.

The director himself admits that up until this point the Astrup Fearnley has been “a very introverted institution in the centre of the city, in this grey part of the business district”. The building standing proudly on the Oslo fjord-front is nothing less than “a new type of museum for us,” he says. There’s no doubting Kvaran’s excitement about the new building’s potential for engagement with the public; it may just take a little time for the Astrup Fearnley to fully embrace and reflect its new situation.

Cindy Sherman is running at the Astrup Fearnley Museet from May 4 to September 8. www.afmuseet.no