Festival season is upon us and with so many new events consumers are spoilt for choice. Stewart Collins, Artistic Director of the Henley Festival talks to European CEO about why his festival is something to shout about 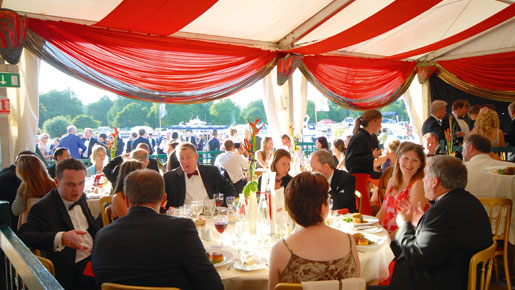 Fancy a summer festival, but can’t face the mud? Looking for A List entertainment, but with elegance, comfort and a like-minded crowd? Step forward the Henley Festival – a five-day, English summer party on the banks of the Thames that’s been running for 29 years and is the hot ticket destination for CEOs. Highlights of this year’s Festival (July 6-10) include Tom Jones, violinist Tasmin Little, cooking by Michel and Albert Roux, original artwork by Salvador Dali and Peter Blake and legendary night club Chinawhite – all presented in a black tie event with a twist of eccentricity and all proceeds to charity.
Stewart Collins is the creative director behind the Festival. European CEO caught up with the one time economist as he prepares for this year’s extravaganza…

Economist to festival director, how did you end up doing this and are you still hankering after spreadsheets?
For all the passion I poured into acquiring the skills required to be a multi-millionaire banker, the allure of the spreadsheet has waned. Obviously good management as a festival director requires that I observe Mister Micawber’s dictum and stay on the right side of his happiness/misery equation, but basically my role is to create a fabulous and appealing mix of established and new talents, well known material and the new. I’ve always believed that people prefer to be entertained and surprised in equal measure and as such I’ve always tried to give audiences what they want, but not necessarily what they expect.

Divas to the £1.5m Salvador Dali sculptures – what challenges do you face   in creating a festival like this?
The Festival is where elegance meets eccentricity and where international stars perform along side emerging talent. This presents all sorts of challenges and of course we do get the odd Diva, but on the whole the stars are amazing to work with, the most memorable in my book being opera singer Bryn Terfel and Will Young. Both wonderful performers and fantastic personalities. But, the biggest challenge is looking for new talent – stand out new performers and the kind of quirky and eccentric acts that give the Festival its unique qualities. Each year I get out and see literally hundreds of acts in all sorts of venues: that’s how I’ve discovered fabulously absurd acts like the Ukulele Orchestra of Great Britain, very well known today, and the Emmy Award-winning Dutch comedian Hans Liberg who’s appearing at the Festival this year. Believe me – he’s very funny.

Every year we set ourselves pretty hefty physical challenges. Just as one example this year we have six monumental Salvador Dali sculptures, not to mention a 25 tonne bronze elephant, all of which have to be manoeuvred carefully into position without damaging the precious Regatta lawns.

The Festival is closely linked to leaders from business – how did this come about?
The Festival was born 29 years ago when the then Chairman of the Henley Regatta, Michael Golder, spotted the opportunity to make further use of the marquees after the annual rowing event. The connections to commerce have continued with business leaders who live locally helping drive the Festival forward and developing it as the hot ticket destination for executives. Leaders such as Sir Martyn Arbib, founder of Perpetual Fund Management [now Invesco Perpetual]; Joe Hemani, Chairman of Westcoast, and Rita Clifton, UK chairman of Interbrand are or have all been on the board. Other supporters include Sir John Madejski, both a serious patron of the arts and Chair of Reading Football Club. It is only through this kind of support – and that of key sponsors like Invesco Perpetual and Westcoast – that we’re able to develop the not-for-profit approach and return any surplus to good causes.

Business involvement has also helped the fine dining aspect of the Festival grow. Albert and Michel Roux Jr head up the main restaurant with Heston Blumenthal’s famous Hinds Head also having a presence. You’d expect me to say this, but the Festival is seriously one of the best places to entertain and be entertained.

How is the Henley Festival audience different to others?
The Henley Festival audience has pretty broad tastes and loves to experience the new and the unexpected. It doesn’t matter whether you’re an opera lover, a collector of contemporary art or just someone who fancies a good old fashioned bop: everyone loves to be taken off their guard. And we cater for different tastes by having different headline acts from across the cultural spectrum – from pop to classical, literary to comic.

The secret is to keep the Festival personal. Despite the fact that we have top international stars such as Tom Jones and classical violinist Tasmin Little, you never feel you’re at some slick, anonymous event. There’s so much that’s also small scale, intimate and personal, ranging from best selling authors, top comedians and our own ‘signature dish’ – the Roving Company of Eccentrica. We also offer personal advice on collecting artwork as part of the whole visual arts ‘offer’.

One of the major differentiators is the Henley Festival’s black tie dress code. Everyone dresses up and this gives the whole thing a special quality. Everybody’s on show and that’s part of the fun – helping to be part of the overall ‘theatrical’ environment.

Deep Purple’s Jon Lord composing work for local children – what benefit can Festivals play in helping the places in which they take place?
To me the act of returning proceeds to the local community is something that sets an arts festival apart from almost any other kind of ‘events’ organisation. As I said, any surplus generated goes into charitable work. We support two major projects, music therapy work with Headway, the national charity for brain injured, and also our very own youth orchestra. The Orchestra enables young people who might not be able to afford to learn to play an instrument to do so. We bought all the instruments, subsidised the tuition for an initial group of 50 and provide a performance programme throughout the year – including a slot on Saturday afternoon at the Festival itself.

One of the most wonderful benefits is the opportunity for these young people to learn from and perform alongside some of the best musicians today. A number of our star performers, such as Nigel Kennedy and Lesley Garrett, have had a chance to meet the orchestra and now Deep Purple’s Jon Lord is planning to compose a special piece for the Orchestra’s fifth year. None of this would have happened of course if we were a purely commercial outfit. Having a charitable mission, we are able to invest in our community and also use our contacts to provide opportunities that simply wouldn’t be possible otherwise.

With weeks to go – how frenetic are you?
Don’t ask! It really kicks in from now. We’re already on 16 hour days. There’s all the fine tuning of the artistic stuff of course, but also the plans for building our state of the art outdoor ‘Floating Stage’ on the Thames, converting the entire regatta site in 48 hours, flying in elephants and much more. But bring it on. We’re looking forward to another fantastic Festival.

Most people go to Festival to relax – How do you kick back?
Cheering on Arsenal, hoping that we thrash the Aussies at anything (my partner’s from Down Under…), and burning calories in the swimming pool. Oh, and endlessly sitting in darkened rooms watching plays, listening to music, laughing at comedians and looking at art. It could sound tragic, but I’m paid to do my hobby. I can’t ever forget that and am very grateful for it.