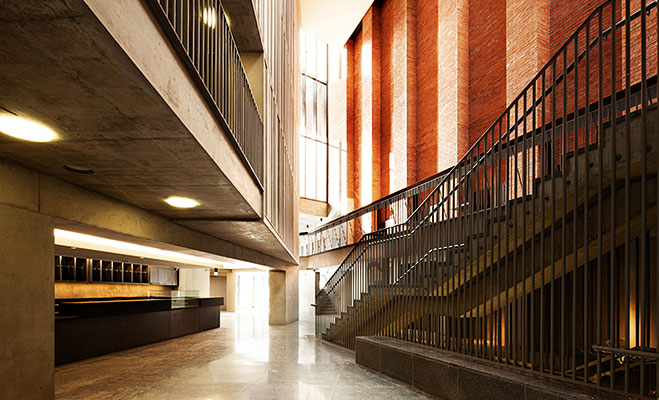 In autumn 2002, disappointment hung over Belfast as the Northern Irish capital’s expensive bid for European Capital of Culture 2008 failed to make the UK shortlist for the title. Fast-forward nearly 10 years, however, and it seems that the whole embarrassing experience was just what the city needed, leading to an increase in arts and culture attendance and a re-evaluation of the importance of the sector to the city.

This is certainly how Anne McReynolds, chief executive of the recently-opened Metropolitan Arts Centre, sees it. Plans for the centre, which opened in April, were first conceived back in 1996, but the development process had been slow. The failure of the Capital of Culture bid, says McReynolds, “delivered a really hard dose of reality across the board in terms of helping people fully appreciate that the infrastructure was shot. Despite the fact that there is this absolutely boiling mass of creativity and energy in Northern Ireland, the fact is that we simply didn’t have venues that were sufficiently fit for purpose to be able to facilitate artistic expression in all its glorious forms”.

They certainly do now. The MAC boasts three art galleries, two theatres, rehearsal, education and workshop space, dance and artists’ studios, and offices for four resident companies, as well as a cafe and bar. The galleries are the largest purpose-built contemporary arts space in Northern Ireland; hosting a frequently changing programme of local and international talents, they are sure to have a huge impact on Belfast’s visual arts scene. McReynolds, who ran the centre’s predecessor, the Old Museum Arts Centre (OMAC), prior to its closure in January 2010, believes the MAC is nothing less than “a generational project.”

Combining art forms
Programming at the centre will be cross-art-form where possible – the MAC’s first theatre production, Titanic (Scenes from the British Wreck Commissioner’s Inquiry, 1912) tied in neatly with the ship-building theme of the exhibition that launched the Tall Gallery – William Conor & L.S. Lowry: A People Observed – but McReynolds is aware of the challenges of such an approach. “The concept of cross-art-form programming is predicated on the concept that there is a crossover between audiences – why else would you do it? – but most of our research shows that there is a greater distinction between visual art attendees and live performance attendees in Northern Ireland than there may be in other parts of the UK.”

The aim, therefore, is to make the MAC as welcoming as possible to those who are interested in the arts but don’t consider themselves visual arts aficionados. This is partly a question of putting into place an effective marketing strategy, but it’s also about building the MAC as a city centre destination in itself. The whole complex is open until seven o’clock every day of the week, with the smallest of the three visual arts spaces, the Sunken Gallery, staying open later still on evenings when theatre and dance performances are in progress.

The striking new concrete and glass structure, designed by the Young Architect of the Year Award-winning firm, Hackett Hall McKnight, is in the heart of Belfast’s arty Cathedral Quarter. Standing in St Anne’s Square, a brand new mixed-use development, the MAC is surrounded by offices, accommodation and restaurants. The Potted Hen Bistro, which was last November voted Best Restaurant in Northern Ireland in the UK National Restaurant Awards, is a stone’s throw away.

Great attention has been paid to the food and drink within the centre too, with the consultant behind the catering at the Tate and the V&A Museum brought in to advise. “We want the MAC to be a place where people just come and chill and hang out and have meetings and do what people do in other European cities but tend not to do in Belfast. We want them to use it as a space that belongs to them”, explains McReynolds. Belfast’s place within Europe is an idea the chief executive returns to again and again. Before the city’s arts infrastructure problems had been addressed, she says, competing with other European cities was a pointless exercise. These days, however, McReynolds feels that Belfast bears comparison with some of Europe’s most liveable and visit-worthy urban centres. “It’s a very small city, but it’s a beautifully formed one”, she says with considerable pride.

Chasing success
This ambitious, Europe-facing approach has informed the whole project, including the MAC’s visual arts offering. “When people come into the galleries”, says McReynolds, “they’ll not understand necessarily why it feels so different and so special, but they will have a very strong sense that these are the kind of galleries they visit when they go on holiday to Barcelona or London or Paris”.

Local artists and galleries will be an important aspect of the centre’s exhibitions programme, but so too will be collaborations with the likes of Tate, who recently partnered with the MAC on Robert Therrien: No Title (Table and Four Chairs).

“For our opening exhibition programme it was terribly important to set the bar high and to explain to people that not only are the galleries in the MAC better than anything they’ve experienced in generations, so will the art in the galleries similarly reach other new standards”, says McReynolds.

The Northern Irish government, the Arts Council of Northern Ireland, Belfast city council, various private foundations and the business sector have invested a total of £18m in the centre, and many millions more have gone into the development of St Anne’s Square.

These are difficult times and whether or not the MAC represents good value for money is impossible to say at this early stage. McReynolds, of course, is quick to defend the outlay from the public purse: “Investing in the arts is a multiplier effect, an economic driver rather than an economic drain. So however much has been invested – and you’re quite right, significant capital funds have been and will be invested in the MAC – that is an economic investment rather than just money down the tubes or a handout to the arts.”
Belfast has not had the easiest of pasts, but with the hope and ambition contained within projects such as the MAC, it seems that the future is bright. It’s time to welcome a fresh a face on the European culture scene.