The Dublin Lockout: Divided no more

It’s been 100 years since the Dublin Lockout – the same year the city’s first public art gallery opened. Now, a number of art exhibitions are commemorating that troublesome era 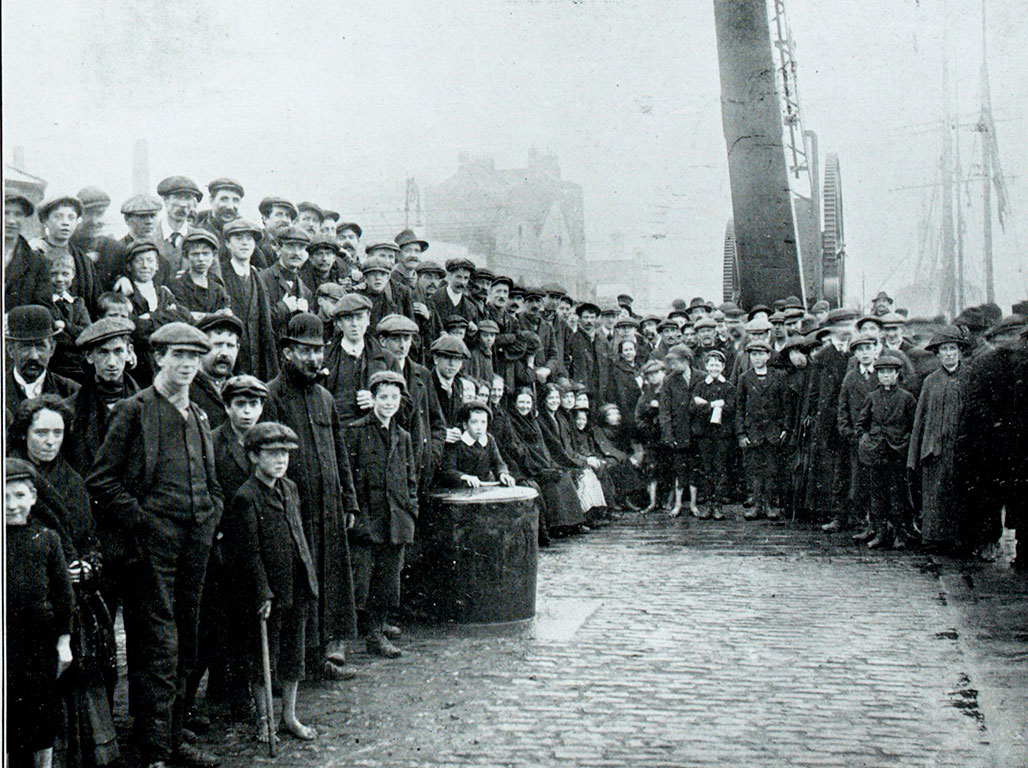 Crowds wait at the dock for food ships
Lifestyle

Ireland hasn’t had an easy time of late. Economic recovery may finally be underway, but a study released by the Republic’s Central Statistics Office in early 2013 found that 24.5 percent of the population were living in deprivation in 2011: a significant increase from 2007, when the Irish financial crisis began. But no matter how hard things have been recently, life still looks pretty rosy compared to the experience of the very poorest in society 100 years ago, when the Irish capital was gripped by the most serious industrial dispute in its history.

On August 26, 1913, the drivers and conductors of the Dublin United Tramway Company stopped their vehicles on O’Connell Street (Dublin’s main thoroughfare), got out and walked home. The strike, called in response to the mass sacking of Tramway workers suspected of union membership, marked the beginning of what became known as the Dublin Lockout.

Stamps on history
Ultimately involving nearly 25,000 workers and 400 employers, the crisis caused untold misery among the city’s poor. Families, who before the Lockout were already living in dire conditions in squalid city-centre tenements, were on the brink of starvation when the strike eventually came to an end in January 1914. The unions had not achieved their specific aims but the workers of Dublin had shown that they would no longer go down without a fight, setting the scene for events as significant as the Easter Rising of 1916 and Ireland’s bloody independence struggle.

A series of exhibitions are taking place this autumn in the Irish capital to mark the centenary of the Lockout, celebrate its heroes and evaluate its historical impact. The Dublin Lockout, a wide-ranging display of photographs, cartoons and artefacts, is on show at the National Library of Ireland until March 30, 2014, while the National Museum of Ireland put the spotlight on the work of the unions during the dispute with Banners Unfurled: Lockout 1913, an exhibition of trade unions banners that ran until October 14. The museum is also presenting the more general 1913 Lockout: Impact & Aftermath Exhibition until May 2014.

Meanwhile a trio of commemorative stamps depicting leading figures of the Lockout went on sale at the end of August. Featuring Jim Larkin (the founder of the Irish Transport and General Workers Union), James Connolly (founder of the Irish Citizen Army, a workers’ militia formed in response to police brutality at union rallies) and Constance Markievicz (an activist who worked tirelessly for the families of the locked out workers). The stamps are intended to “raise awareness locally, nationally and internationally of an event of considerable economic and political significance,” said Irish Minister for Communications Pat Rabbitte.

Art funding
There’s one institution commemorating the Lockout this autumn with a personal interest in the subject. As the debate over the rights of Dublin’s workers raged on in 1913, a parallel and interconnected conversation was taking place over an issue its defenders considered no less pertinent to the good of the city and its inhabitants: the establishment of Dublin’s first public modern art gallery.

One hundred years on, the institution in question, Dublin City Gallery The Hugh Lane, is this autumn presenting Dublin Divided: September 1913, an exhibition exploring these interwoven stories through paintings from its historic collection, both portraits of the individuals involved and scenes that evoke the period.

Art dealer Hugh Lane offered his collection of modern art to the city of Dublin in 1904, aiming both to provide the Irish with access to international art and foster a school of Irish art. The collection – which featured works by Auguste Rodin, Édouard Manet and Edgar Degas alongside important Irish artists of the period – went on display to the public in temporary premises in 1908, but Lane wasn’t satisfied. By 1913 he was still campaigning aggressively for a permanent home for the works, funded from city coffers.

Support came from diverse and sometimes surprising quarters says Margarita Cappock, Head of Collections and Deputy Director at the Hugh Lane. The city’s cultural elite was well represented – George Bernard Shaw, Lady Gregory, Lane’s aunt and founder of the Abbey Theatre, and nationalist writer and painter George William Russell were all in favour – as were political figures such as Tom Kelly, a founding member of Sinn Féin and a Dublin City Councillor. But there was considerable opposition too, from those who felt that it would be absurd to spend municipal funds on something as decadent as an art gallery when living conditions for the city’s poor were in such an appalling state.

Raising awareness
One of the principal opponents to Lane’s plan was William Martin Murphy, owner of the Dublin United Tramway Company and the boss who led employers in the city against the unions during the Lockout. Martin Murphy, says Cappock “just thought it was a complete waste of money and, because of all the distress in the city, that it could be better spent. Even though he himself was obviously causing some of that distress by locking out his workers.”

Jim Larkin, on the other hand, was strongly supportive of municipal funding for the gallery. “Though raised in poverty,” Cappock writes in her essay in the exhibition’s catalogue, the Lockout’s primary agitator “appreciated art and beauty and sought the cultural as well as economic and social liberation of the workers”.

But if many of those campaigning for the gallery also spoke out in support of the locked out workers and fought to raise awareness of their situation, Lane himself occupied a more morally ambiguous position. “He was at fault in that he was completely focused on what he wanted, which was the gallery,” says Cappock. “He didn’t really get to grips with the seriousness of the situation and the plight of the workers.”

Lane died only two years later, so never saw his collection take up permanent residence in its current home, Charlemont House, in 1933. He would surely have been delighted to know, however, that the argument for public support for modern art was ultimately won, and that despite tough economic times and inevitable cuts to public funding, the Hugh Lane Gallery is today secure in its support from the City of Dublin. At least as far as arts funding is concerned, Dublin is divided no more.