It is difficult to know whether to pity or envy Bernard Fornas, Chief Executive of Cartier, one of the world’s oldest and most exclusive brands of jewellery and watches. Since he took over as President and Chief Executive in 2002 the company has seen more economically bad times than good, which have driven its traditional […] 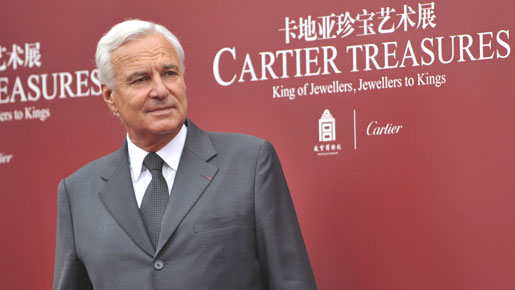 It is difficult to know whether to pity or envy Bernard Fornas, Chief Executive of Cartier, one of the world’s oldest and most exclusive brands of jewellery and watches.

Since he took over as President and Chief Executive in 2002 the company has seen more economically bad times than good, which have driven its traditional super-rich American and European clients into unusually cautionary spending habits. For Fornas, the challenges mount as he struggles to grow the business without losing the cachet that makes his brand desirable.

To do this he needs to maintain high visibility with his target clients, and globe-trotting in his private jet is an inevitable part of the job. One day he can be found opening a new Cartier boutique in Baku alongside actress Monica Bellucci, another he will be hosting a black-tie dinner at Mikhailovsky Castle in Moscow, opening museum collections in Shanghai and Japan, or attending the Cartier International Polo Challenge in Dubai.

Nominally based in Geneva, Switzerland, he “spends his life in planes”, not to mention in an endless round of high society functions.

A graduate of Ecole Supérieure de Commerce in Lyon, France and with an MBA from the Kellogg School of Management at Northwestern University in Chicago, Illinois, Fornas began his career as an assistant product manager with Proctor & Gamble. He quickly made the transition from fast moving consumer goods to high end luxury, leaving Camay (soap) behind to join the International Gold Corporation, followed by Guerlain, before joining Cartier International as international marketing director.

Described as silver-haired, immaculately dressed, poised and polished, Fornas is clearly at home with the multi-millionaires his products are designed for. A fellow collector, he favours vintage cars and owns a collection of vehicles from the 1960s and 70s that includes a Mercedes 300 Gullwing. “From all my collection it’s my favourite,” he says. “It’s an icon.”
Perhaps it is this shared understanding of the value of luxury and exclusivity that enables him to speak so passionately about the Cartier brand. Referring to its ‘DNA’, he talks about the need to retain the ‘Cartier smell’ and ‘Cartier touch’ in any new designs. But while he respects the tradition of the 164 year old firm, he is also acutely aware of the need to constantly create new designs with new materials. “Luxury is innovation,” he says. “As long as I’m here, we will innovate not only on the shapes, materials and ideas, but the whole scope, because that is what the whole of luxury is about.”

He is also quite clear about what defines his niche. Slapping high prices and the word ‘luxury’ on a product does not elevate it to the level of a maison like Cartier.  Likewise, brands like Cartier should not be tempted to generate sales volume by producing lower value items to appeal to the middle market. He once told an audience at the International Herald Tribune Annual Luxury Conference that for Cartier, $250,000 is considered the starting point for its high jewellery collection. The middle market is the $20,000 to $250,000 range.

Some would describe his approach to weathering tough economic times as brave. In early 2009, when parent company Richemont posted a drop in third-quarter sales with the comment, “given the current economic climate and the uncertainties facing us, we see no cause for optimism,” Fornas pressed ahead with his product innovation plans.  At the 2010 International Salon of Fine Watchmaking in Geneva, Fornas introduced revolutionary new technology for watch movements that cuts the need for maintenance in about half. The cost of routine maintenance on a high end watch currently runs to well over $500 every three to five years.

Cartier is also pressing ahead with ambitious plans to increase its network of high quality boutiques, particularly in new and emerging markets, and for Fornas this is a key factor in ensuring the brand is able to weather the economic storms. “Our company prepared for the worst when everything was going well,” he points out.  “We are number one in China, in Russia, the Middle East, and in the nations composing the CIS. Our past and current investments in these emerging countries enable us to compensate for the slow-down on traditional markets such as the USA and Japan. We are indeed continuing to open boutiques in these new markets to reinforce our positions.”

Like all high end luxury brands, Cartier is being forced to review its marketing budgets and focus only on those activities that are expected to generate results. These tend to facilitate one-on-one sales opportunities with target clients, like the lavish excursion to Istanbul the jeweller laid on for 150 of its best clients last autumn, where guests were treated to tours, sumptuous dinners and a private viewing of 300 new high jewellery pieces displayed in a mansion on the Bosporus.

But it is not all just about jet-setting, wining and dining with the very rich. Fornas takes Cartier’s position as a leader in the industry very seriously, and believes that gives him a responsibility to promote good corporate social responsibility. In 2008 he went on record in a television interview saying that as long as human rights problems continued in Burma, Cartier would not buy any rubies from that country. Cartier has also put up a public fight against the trade in so-called blood diamonds.

Industry leader or not, Cartier has had to deal with some fundamental and far-reaching changes in the market. Fornas is confident that he has led his firm through the worst.  “Frivolous times are gone,” he has observed pragmatically, adding, “Expensive things will still sell. It’s not that there’s no money.”