There are not many culinary experts who can boast that food and drink have been an integral part of their family’s heritage for centuries, but Andre Cointreau, president of France’s acclaimed Le Cordon Bleu cooking school, can easily do so 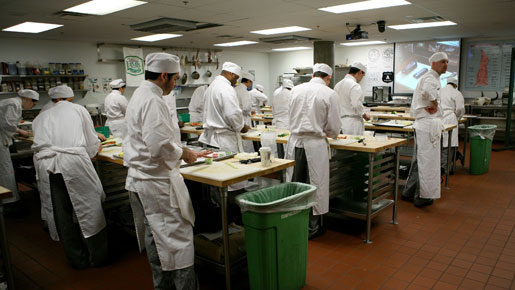 A direct descendant of the founding family of the Cointreau liqueur and Rémy Martin Cognac, Cointreau took a degree in business studies at the Hautes Etudes Commerciales in 1972, France’s prestigious business management school which produces most of the country’s chief executives, before graduating in political sciences in 1974 in Paris. Cointreau then began his career with Unilever and then later with the American Express Banking Corporation.

Cointreau joined the family business, Groupe Cointreau, as a commercial director in 1977, later becoming chairman and managing director of the company Pagès and secretary general of Cognacs Frapin. As a determined director, he was involved in the holding company created to govern the family-owned assets of Rémy Martin and Cointreau.

However, his stay with the family business was short-lived. In 1984, with the Cointreau-Remy Martin clans locked in a bitter struggle for control of the family firm, Cointreau struck out on his own to escape the internecine rivalry, buying the renowned L’Ecole de Cuisine et de Pâtisserie Le Cordon Bleu (known simply now as “Le Cordon Bleu”) cooking school from its aging director, Elizabeth Brassart, a long-time family friend. Established in 1895, Cointreau became the school’s president and has transformed it into an international group that is constantly looking to expand its horizons.

Furthermore, he is also president and CEO of Pierre-Deux French Country which he bought in 1993. The company has a chain of twenty prestigious boutiques which sells home furnishings from the French countryside in the United States and Japan. Cointreau’s wife, Hedwidge Cointreau de Bouteville, runs its stores.

But it is his expertise in the realm of fantastic cuisine that Cointreau has made his reputation and sealed his name in the annals of culinary history. Since his appointment, Cointreau has not only preserved Le Cordon Bleu’s quality and prestige, he has also expanded the school’s breadth and influence. During his tenure, he has shifted the Le Cordon Bleu business from one school in Paris to a multinational concern.

Today, Le Cordon Bleu proudly offers more than 29 international schools across five continents, and is attended by more than 20,000 students every year. They are taught by master chefs, the majority of which come from Michelin-starred restaurants or are winners of prestigious competitions and titles such as the Meilleur Ouvrier de France. Critics complained that such accessibility would dilute the school’s prestige, but Cointreau is adamant that these courses have only strengthened its stature.

What is more, Cointreau has made sure that the organisation is more than an elite cooking school. In more than twenty years, Le Cordon Bleu, which is a member of CampusFrance, a national agency for the promotion of French higher education abroad, has become one of the most extensive world institutions with programmes ranging from culinary training to university curricula in food and beverage, hospitality and tourism. Its programmes award certificates, diplomas, Associate degrees, Bachelor degrees, and Masters through MBAs.

The culinary school even contributes to research chairs. For example, Le Cordon Bleu operates what it calls “Signatures”, an observation internship restaurant in Ottawa, Quebec, Canada, which is currently one of only 63 restaurants in North America to have been awarded a “Five Diamond” rating by the Canadian/American Automobile Association. Le Cordon Bleu Casa de Francia has also been granted Four Diamonds. Located in the former French Embassy in Mexico, this is a non-profit establishment made up principally of scholarship students.

Cointreau has also realised that there is business to be made in leveraging the school’s fantastic reputation. Le Cordon Bleu operates several ancillary operations ranging from book publishing, producing gourmet products and tableware, to consulting and licensing – all of which make up a vast network of “ambassadors” of culinary know-how and French “art-de-vivre” encouraging cultural exchange.

But Cointreau has not only tried to expand the business – he has also tried to establish the school’s brand as a symbol of excellence and of French cuisine and culture. He has actively participated in the creation of the Science and Food Culture Foundation within the Académie des Sciences, and the Institute des Hautes Etudes du Goût (HEG) in conjunction with Reims University.

And he has been rewarded and praised for his efforts. In 2005, Cointreau received the Hall of Fame award for his contribution to the International Food & Beverage Forum. In 2008, he was awarded the Légion d’Honneur from the Foundation Alliance francaise for his contributions and accomplishments as head of Le Cordon Bleu and “for his unique educational concept”.

Cointreau has also been heavily involved with the Alliance Française, a Paris-based organisation whose mission is to promote French language and culture all over the world. For many years, Le Cordon Bleu and the Alliance Française have shared a single cultural and educational mission to promote France’s cultural influence and values across the globe, and Cointreau has been on the board of governors since 1993 and is a founding member of the Fondation Alliance française. In 2003, he was awarded “Person of the Year” by the Federation of Alliances françaises of the US, and in 2005, he received the Hall of Fame award for his contribution to the International Food & Beverage Forum.

In an interview with the Los Angeles Times in 1995, Cointreau said that his famous family name was both a blessing and a curse. “If I’d been born with a different name I’d probably be more relaxed. I imagine I’d be a teacher. I love teaching.” But as the scion of two eminent French clans – Cointreau of Angers and Remy Martin of Cognac – and a man raised, as he explains, “in a ‘spirits’ environment”, that wasn’t an option. “On the one hand, the family name opened doors,” Cointreau said.

He added: “You’re not in the anonymous crowd when you’re a Cointreau. But, on the other, you probably have to prove yourself more if you want to play the game.” It is fair to say that Cointreau has more than proved himself.