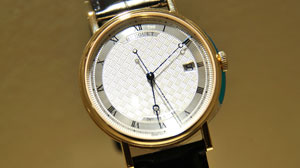 Over the last 52 weeks the price of Swatch shares reached a low of 288.50 at the end of September/beginning of October 2011, after reaching a high of 443.70 at the beginning of May. Since then it has largely recovered, yet we still regularly see significant volatility in the price movements of this stock.

Swatch’s shares fell about four percent to SFr398.30 at the beginning of February. This occurred after the company’s full-year results were published, and they came just a little short of what the market expected. Market consensus was an increase of 18.5 percent in net profit, while the actual results showed an increase of only 18.1 percent.

Given how competitive the market for luxury goods currently is, these were not bad figures at all.  The main reason why the stock dropped four percent when the results were published was probably because it increased more than 18 percent in January on the back of the higher profit expectations.

Eva Quiroga, an analyst at UBS, said: “Had [Swatch’s] stock not rallied by so much, it would have been different.  Taking a step back, with the currency working against them, this number isn’t a bad number at all.”

The fact of the matter is that Swatch is in the luxury goods sector – a sector of the market that has actually being doing exceptionally well over the past three years. Any sign of weakness, such as slightly lower than expected profit figures, will be looked at by the market very carefully.

Swatch manufactures a range of watches under different brand names such as Omega, Tissot, and Longines. The company says it expects continued growth for the rest of the year despite the increasing prices of diamonds and gold, and the strong Swiss Franc which put pressure on profit margins during 2011.

Nick Hayek, Swatch’s CEO, remains steadfastly bullish for the future of watch sales during 2012. “Our sales are up by double digits in January, and February looks very close to that,” he said in an interview with Dow Jones Newswires.  He added: “The comparatives are tougher (in 2012), but we think we can still grow profit.”

While it is a fact that the luxury goods market has remained relatively immune to the economic downturn up to now, this will not necessarily be the case in future. With the increasing cost of raw materials and another bleak year facing Europe, one can expect that sooner or later it will have an effect on manufacturers of luxury products such as Swatch.