CEO and co-founder of one of Russia’s most successful IT security companies, Kaspersky Lab, Yevgeny Kaspersky is a mathematical prodigy turned millionaire by way of pure curiosity 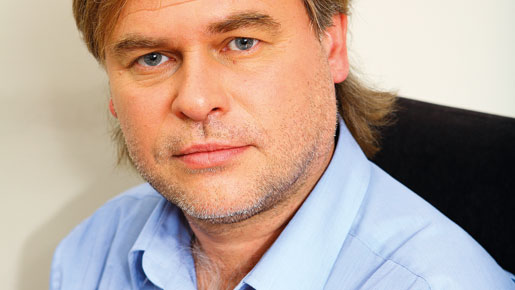 Upon hearing about someone who began “collecting viruses as a hobby”, you might picture an eccentric scientist locked away in a laboratory somewhere. However, Yevgeny “Eugine” Kasper- sky is far from being a mad scientist and the viruses in question are the type found damaging your computer. He does work in a lab, though – his very own Kaspersky Lab. What started off as a hobby has become one of the world’s most successful computing security companies and Kaspersky himself has become one of the foremost authorities in the field.

An unusual hobby
The foundations for Kaspersky’s future career were laid early on in his life. His love for mathematics as a child made him something of a prodigy; while still at school, one of his favourite pastimes was to solve problems set in mathematical journals. During this time he also took classes in physics and mathematics organised by the Moscow Institute of Physics and Technology for high school students. He then spent the last two years of his high school education attending physics and mathematics courses as part of a programme for gifted children organised by Moscow State University.

Upon finishing high school, he went on to study mathematics, cryptography and computer technology at the Institute of Cryptography, Telecommunications and Computer Science, graduating in 1987. However the real breakthrough into his current business came in October 1989, when he detected the Cascade virus on his work computer at a research institution. While most people get frustrated and somewhat concerned when their computer becomes infected with mali- cious software, or ‘malware’, Kaspersky willingly accepted the challenge. He set about ana- lysing Cascade, which led to him developing his first disinfection utility.

Poster boy for the anti-virus
Kaspersky’s run-in with Cascade intrigued him. He began collecting malware, analysing it and developing disinfection programs, laying the groundwork for Kaspersky Lab, which he founded with his then wife in 1997. Ten years later, he took over the role of CEO after Natalya Kaspersky left the position to become Chair- woman. The company is now one of the foremost providers of commercial anti-virus and computer security software in the world: latest results from the US show that while the market share of longer established American giants McAfee and Symantec’s is falling, Kaspersky Labs’ is growing.

Described by The Register as “a colourful figure in the world of computer security,” Kaspersky is an unusual character in that he is well known. This is an industry where the CEOs and Chairmen largely keep themselves to themselves, however Kaspersky is often seen giving seminars and offering interviews. Many of the Lab’s most interesting statements come from Kaspersky and he is happy to talk openly about notorious viruses, sometimes with a sense of admiration.

In 2009 he admitted to being impressed by the ‘slickness’ of the Conficker worm, telling ZDNet.com.au: “They are high-end engineers who write code in a good way. They use cryptographic systems in the right way, they don’t make mistakes – they are really professional.” He also doesn’t shy away from controversy: in September 2010, he added his voice to those researchers who believed that the Stuxnet virus, which targeted Iran’s uranium enrichment facility, was being controlled by one or more nation states.

Ambassador for the internet passport
This outspoken nature isn’t restricted to commenting on the professional nature or origin of malware outbreaks, though. In 2009 he called for an end to internet anonymity, an idea that remains controversial today, as he believes that it compromises security, “Everyone should and must have an identification, or internet passport,” he told ZDNet Asia, going on to say: “I’d like to change the design of the internet by introducing regulation – internet passports, internet police and international agreement – about following internet standards. And if some countries don’t agree with or don’t pay attention to the agreement, just cut them off.”

He argued that internet protocol, or IP addresses are not enough as, while you can trace activity back to a specific computer, if it is in a cyber café you cannot trace the end user. “Think about cars,” he said, “you have plates on cars, but you also have driver licenses.” It was an attitude that raised eyebrows and upset civil liberties groups, but then Kaspersky hasn’t got to the position he is in now by being a shrinking violet.

Rising up the charts
Kaspersky is also far from bashful when it comes to talking about his future ambitions for Kaspersky Lab. At the 2011 InfoSecurity conference in London, he told IT PRO website that his plan currently is for his company to become the fourth largest provider of IT security software in the world, “then number three, then number two, then number one,” knocking Symantec and McAfee from the top spots. His strategy to achieve this is very dynamic, focusing not so much on the home PC market as on mobile technology.

He would “not be surprised” if already Apple’s iPad sales had overtaken those of its Mac ranges, saying that there is no need for “heavy machinery.” This is an area in which Kaspersky Lab is already very strong. He is also by no means the only person holding this belief in the industry. Therefore, he believes that bringing his business into the position of being number one in security for mobile devices is the way to becoming number one globally across all markets.

He also believes in the importance of keeping his company private (he and his ex- wife own around 80 percent of the company between them). The reasoning behind this is that it will allow Kaspersky Lab to remain focused on technology and innovation, which will be the keys to the business’ future success. Having built up Kaspersky Lab from a hobby collection of viruses to an internationally recognised and respected brand, one can have every faith that in treading his own, individual path, Yevgeny Kaspersky will once again be very much on the mark for the future.