A family tradition has taken Johannes Sittard from a German classroom to the helm of one of the newest entrants to the FTSE 100 share index, mining firm Eurasian Natural Resources Corp 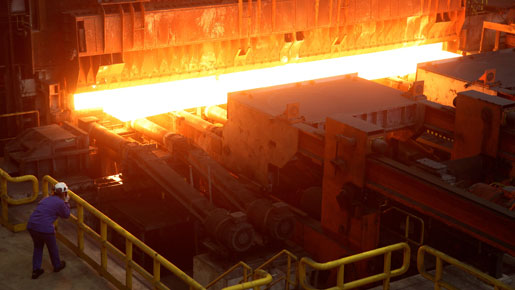 ENRC, which recently moved up to the blue-chip board of the London stock market, accounts for four percent of Kazakhstan’s GDP and is one of the world’s biggest producers of the raw materials that go into steel – a material close to the chief executive’s heart.

“My grandfather and father were both steelmakers, and so I became a steelmaker,” he told us in response to emailed questions. “All of my personal targets early on were bound up with that industry. I grew up in the shadow of a steelmill in Germany.”

Sittard, 64, began his career as an academic at the Technical University of Clausthal-Zellerfeld in the 1970s, where he gained a doctorate in metallurgy, before joining steelmaker Ispat International. Under the leadership of Lakshmi Mittal, one of the world’s richest men, the firm went on to become ArcelorMittal. The Indian billionaire, known for audacious mergers and acquisitions that have put his firm at the top of the global steelmaking tree, left his mark on Sittard.

“I do admire Lakshmi Mittal, for his ability to make decisions on the basis of the big picture and without getting lost in the detail,” Sittard says. “He has good instincts. He is prepared to take risks, unlike those who worry too much about covering their backs.”

Like Sittard, Mittal’s family background is in steel. “More than I admire Lakshmi, I admire his father. He was the reason I worked for Mittal,” Sittard says.

Sittard joined the firm now known as ENRC in 2001. The company began life as a group of assets bought by company founders Patokh Chodiev, Alijan Ibragimov and Alexander Machkevitch during Kazakhstan’s wave of privatisations in the mid-1990s.

It now employs 62,000 people, made more than $3bn in 2006, and as of its first day on the FTSE 100, had a market capitalisation of around $23bn. The three founders each retain stakes of 14.6 percent, while Sittard’s own shareholding is less than three percent. Shares in the company have risen 80 percent since the company floated in London last December, dramatically outperforming the all-share index.

Part of ENRC’s success lies in the proximity of Kazakhstan, which is home to most of its iron ore, chrome and manganese mines, to China, voracious user of all things mineral. The two countries may be neighbours, but while Kazakhstan is happy to supply the building blocks of a new China, it has its eyes fixed on the West, Sittard says.

“It is not Kazkhstan’s ambition to become like China. It is their (Kazakhstan’s) aspiration to be a modern state modelled on a western country. The country has achieved a vast amount in its 10-15 years of independence and is fast embracing modernity.”

Being at the starting point of a process of industrial growth is what excites Sittard about the raw materials business.

“No industry can grow without the use of natural resources,” he said. “This sets the natural resource industry at the beginning of a chain of value creation, and makes it a great place to create as much value as possible.”

When not commuting between London, Kazakhstan, China or any of the other metal-producing or consuming parts of the world, Sittard can be found on the ski slopes or the coast.

“I have skied every year but one of the 55 since I first started. I ski in Austria where I have a house near where my wife grew up. In the summer, I enjoy watersports such as diving, surfing and sailing.”

An outdoor sportsman as well as a mining executive, he is keenly aware that extractive industries take a particularly heavy toll on the natural world. “I am also very conscious of the environmental impact of the work I do and am motivated to minimise the negative impact.

“In the past, mining has had a substantial negative impact on the environment. We have adapted to this to a large extent, but it will continue to be a big challenge for everyone in the industry.”