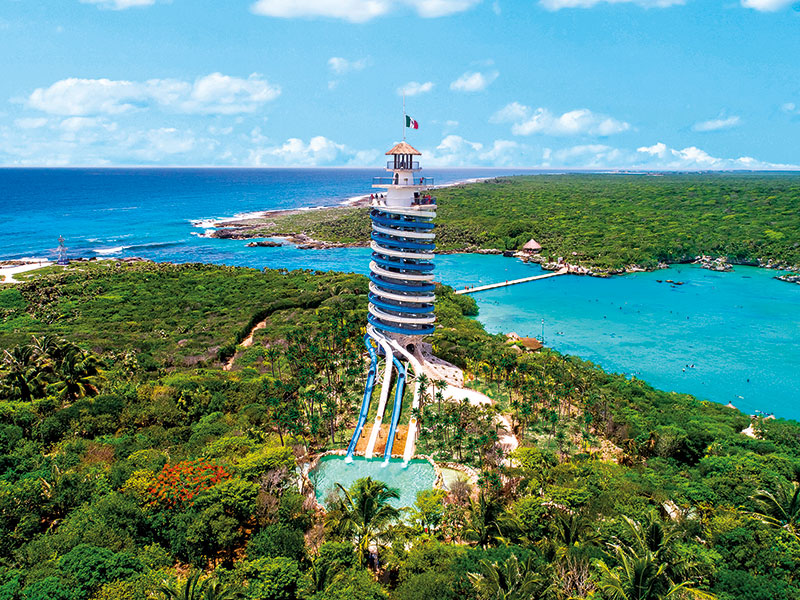 Experiencias Xcaret’s success has allowed for the creation of five more parks, each with its own distinctive offering: Xel-Há (pictured), Xplor, Xplor Fuego, Xoximilco and Xenses
World View

Tourism is sensitive to consumer habits and shifting trends. As such, it must evolve to satisfy these new demands. Sun and beach tourism, which peaked during the 1960s, changed after the boom of beachfront hotels and did so again to adapt to the advent of all-inclusive packages that combined food and beverage offerings with accommodation.

All-inclusive holidays cater to consumers’ continual search for better value for money, but they also satisfy a new desire presented by modern travellers: guests expect more from their holidays, and continue to search for exciting and unforgettable experiences.

In recent years, all-inclusive hotels have adapted their offerings by including some activities on hotel grounds. At Experiencias Xcaret, we have taken it one step further with the development of our new All-Fun Inclusive package.

A new way to holiday
The All-Fun Inclusive concept, which has taken many stakeholders in the tourism industry by surprise, stems from a different premise to the sun and beach tourism found elsewhere. Experiencias Xcaret has always offered a robust entertainment programme at its parks, with options that appeal to a variety of market segments. With All-Fun Inclusive, guests have access to this range of entertainment options, as well as luxury accommodation, all seven of the group’s parks, and tours to Xenotes and Xichen.

The natural and cultural surroundings of the region have been essential to this new business model, which takes full advantage of the Yucatán Peninsula’s many delights. The area, which separates the Gulf of Mexico from the Caribbean Sea, offers tropical rainforest vegetation, underground rivers and caves right along Mexico’s coastline.

At Experiencias Xcaret, we have been listening to our clientele for almost 30 years, studying and processing their opinions and recommendations

It also has a strong cultural offering, as the Mayan civilisation occupied the peninsula until the arrival of Spanish conquistadors in the 16th century. The remnants of these indigenous communities can still be seen today, whether it’s in the awe-inspiring architecture of Mayan temples or the flavoursome street food found in the plaza of Valladolid.

Experiencias Xcaret’s story began almost three decades ago, with the opening of Xcaret park. Since its opening, the park has consistently added new features to its entertainment offering, both natural and cultural. This constant development of attractions has helped to entice more than 45 million visitors to Grupo Xcaret establishments.

Xcaret’s success has allowed for the creation and operation of five more parks, also in the state of Quintana Roo, each with its own distinctive offering: Xel-Há, Xplor, Xplor Fuego, Xoximilco and Xenses. The company has also developed a tours division that brings guests to the Yucatán Peninsula’s many archaeological sights. In addition, Xenotes, a tour specialising in the impressive underwater features found in the area, provides further opportunities for visitors to explore the area’s natural beauty.

At Experiencias Xcaret, we have been listening to our clientele for almost 30 years, studying and processing their opinions and recommendations. That has allowed us to be certain of what steps need to be taken in order to continue our expansion process. While the All-Fun Inclusive concept may be relatively new, its success is founded upon Experiencias Xcaret’s original guiding principle: delivering spectacular entertainment offerings alongside the best service.

Nestled between lush vegetation, rivers and coves, Hotel Xcaret Mexico appears to emerge from the jungle. Its eco-conscious architecture highlights the area’s natural beauty and is perfectly complemented by the decor, which is an authentic tribute to Mexican artisans.

In the area surrounding our most important park, Xcaret, as well as Xplor, Xenses and Xplor Fuego, we are developing infrastructure to cater to each guest’s needs. We aim to add 6,000 rooms, a convention centre, an arena for events with a capacity of 12,000 people, and a mile-long shopping centre that will combine entertainment, commerce and restaurants.

This vast complex will be named Destino Xcaret and is the culmination of a carefully designed strategic plan. The project will be rolled out in six stages and is scheduled to cost $2.5bn (€2.19bn), but it will certainly be worth the investment. Once complete, the 370-hectare complex will become a leading destination within the Riviera Maya, encouraging more tourists to visit Mexico.

Pioneering progress
Experiencias Xcaret has always aspired to be unique in the sustainable tourism industry, but when its founding members created the first park, they weren’t fully aware of just how significant its impact would be.

Given the beauty of the 80 hectares that make up Xcaret today, president of the company Miguel Quintana and his partners (my father, my uncles – Oscar and Carlos Constandse – and now myself) were adamant that the project should focus on the environment more than tourism. It was the end of the 1980s, Cancun was already a significant tourist destination, and the corridor towards Tulum was beginning to develop.

In 2015, BBC Home Editor Mark Easton stated that the opening of Xcaret in 1990 demonstrated the mass potential of sustainable tourism and marked the beginning of a new tourism model: “They didn’t realise it at the time, but [the Xcaret founders] were pioneers of sustainable tourism.” Today, ecotourism, which allows visitors to enjoy an area’s geographic and cultural highlights while protecting those sights for future generations, has become commonplace. The sustainable tourism industry owes its development, in part at least, to the success of Experiencias Xcaret.

Experiencias Xcaret’s sustainable vision has strengthened over time, and many of the company’s sustainability initiatives reflect this. The park has facilitated the release of 12 million sea turtle hatchlings into the ocean and helped with the reintroduction of the scarlet macaw to the south-west of Mexico. Coral reef restoration, which promises to be an effective long-term solution to the damage caused by pollution, has also been extensively implemented.

The Experiencias Xcaret family has grown significantly since it was founded. Today, we boast almost 10,000 staff members who see the company as a way to contribute to efforts that will ensure the area’s wildlife thrives for decades to come. By hiring staff who are passionate about protecting Mexico’s natural beauty, we have safeguarded the legacy of our founding partners. We hope to uphold the philosophy of our organisation for the next hundred years.

We are a company that keeps growing and innovating. We are in the process of opening a new adventure park, Xavage, and in 2019 we will welcome our 50 millionth visitor. This milestone marks the beginning of a new phase for a group that has become a standard-bearer in the international tourism industry, proudly presenting Mexico to the rest of the world.