Backed by the facts

A number of the EU's areas lay claim to being the best base in Europe. Not Bavaria: Bavaria is Europe's best-performing base. It doesn't have to assert any claims 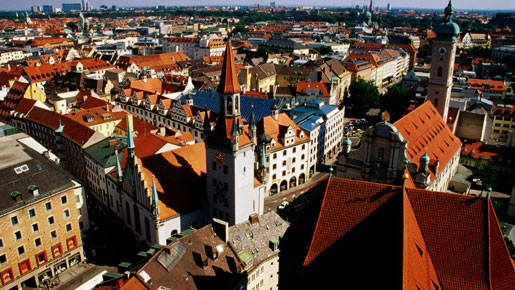 Others – independent and thus objective rankers – make the case for Germany’s southeastern state of 12 million. These rankers include the authoritative Manager magazine. Its December 2009 study on ‘The EU’s Economic Regions: Performance and Prospects’ found that five of the Union’s top ten performing regions (and 12 of the top 25) are located in Bavaria. An amazing result when one considers that the European Union (EU) is comprised of no less than 1,100 of such regions.

In coming up with its results, the survey employed 25 key indicators. These included numbers of advanced degree holders, demographic structure and trends, labor market, and economic and intellectual output in and from each region. These indicators, in turn, were compiled from standardised data provided by Eurostat and other official sources. Since Bavaria and its constituent regions regularly top Germany-wide and international rankings, these findings came as absolutely no surprise.

Manager magazine’s rankings were corroborated by the findings of a report, also released in December, published by Focus Money (one of Germany’s leading business magazines).The report took a searching look at the economic output and prospects of Germany’s 401 counties and cities—and came up with a winner: the central Bavarian county of Erlangen-Höchstadt. The county helped power Bavaria to a very impressive performance. Six of the top ten and 20 of the top 30 finishers are located in the state.

In addition to export revenues and share thereof stemming from high-tech products, the key international indicator of Bavaria’s edge over competitors is patents. With the occasional exception of Baden-Württemberg, Bavaria has long been Europe’s perennial number one for patents applied for and received.

Sustained and sustainable growth through diversity

Silicon Valley and IT. Route 128 and the life sciences. Shenzhen and electronics manufacturing. Most of the world’s star economic regions have ridden a single big-ticket industry to world prominence.

Not Bavaria. The sustained, rankings-topping growth turned in by the state’s economy over the last five decades, in which Bavaria transformed itself from a largely agricultural backwater into a technological powerhouse, is a product of multi-big ticket diversity. Bavaria is Germany’s (and in many cases, Europe’s) leader in a large number of ‘sunrise’ industries.

Centered around Munich and its southern suburb of Martinsried (all forms of biotech), Regensburg (biotech-based medications), and metropolitan Nuremberg (medical and laboratory equipment), Bavaria’s life sciences community is one of the world’s top performers, as judged by number of dedicated companies, revenues achieved by them, and the systems, products and services developed, manufactured and supplied by them.

There are seven major centers of aerospace engineering in the world. Southern Bavaria is the only one of them which is active in all of this sector’s many areas, which include satellite-based navigation, communication and positioning services; space mission control and Earth monitoring operations; military and civilian aircraft production and assembly; and much more.

The name ‘Bavaria’ is synonymous with ‘high performance motor vehicles’, be they from BMW (Munich) or Audi (Ingolstadt). As is the case with MAN commercial vehicles, one ‘engine’ of the driving performance, reliability, safety (and pleasure) displayed by the companies’ products is constituted by the components and services provided by the state’s 1,100 automotive suppliers.

Information and communication technologies started with the manufacturing of clunky computers and of  building-sized switching facilities. ICT then went on to reduce the size of its equipment, to increase its speed and range of features, and to thus liberate information gathering, processing and communication from the restraints of time and place. Including mp3, laser-based glass fiber-based grids and SasS (software as services), many of the innovations driving ICT’s development were created in Bavaria.

From the sun (photovoltaic and solar concentration), wind, water, the bowels of the Earth (geothermal and heat pumps), organic wastes, and the decomposition of water (fuel cells). There are many ways of producing renewable energy, and Bavarian companies, institutes and communities are among the leaders in developing and deploying all of them. Other major industries in Bavaria include industrial engineering, microelectronics, the nanotechnologies, the media and agribusiness.

A diversity of place

The list of accolades accorded to Munich (pop: 1.3 million) is long and getting longer. “The best place in which to work and live in the world” (The Monocle magazine). The praise heaped upon Bavaria’s capital should not obscure the fact that virtually each of the state’s communities—no matter how small—is home to one or more ‘world champions’. “Germany’s most successful and enterprising city” (WirtschaftsWoche business weekly).

Take Herzogenaurach. This central Franconian town of 23,000 is the headquarters of both adidas and Puma—two of the world’s largest producers of sportswear and sporting goods. Or take Nuremberg (pop: 500,000). It forms the hub of a region renowned for advanced communication, medical, transport and media technologies.

Augsburg (pop: 263,000), Bavaria’s third largest city, is a striking example of business base re-engineering. The city has transformed itself into a seminal source of environmental technologies, advanced materials and aerospace subsystems and components.

Bavaria’s rise to the forefront of technological and economic advancement has been anything but a matter of happenstance. In the aftermath of World War II, the state government formulated and implemented the policies still sustaining growth today: generous support of all levels and kinds of education, of research and development, and of the systems channeling the graduates and innovations issuing from these systems of education and technology development to the local business community.

Partially funded from the proceeds of the state’s privatisation program, these policies have produced a network of institutions of higher education and of research covering the entire state. Prime among these institutions are Munich’s Ludwig Maximilians and TUM Technical Universities. These have been repeatedly ranked the best in Germany and among the best in the world.

To pursue these policies in the 21st century, the state government launched in 2006 a new campaign. It is based on furthering the coalescing of Bavaria’s 19 sunrise sectors into clusters. Doing such, in turn, fosters the transferring of technologies and thus joint development of products and services among the companies, institutes, institutions and agencies comprised in each cluster.

A proverbial quality of life

As one or all of our millions of visitors would be happy to tell you, Bavaria-its cities, villages and countryside-is beautiful, gracious, safe, healthy and green. These traits explain why companies are so eager to invest in our state – and why their employees are so willing to move here (or are determined to stay here).