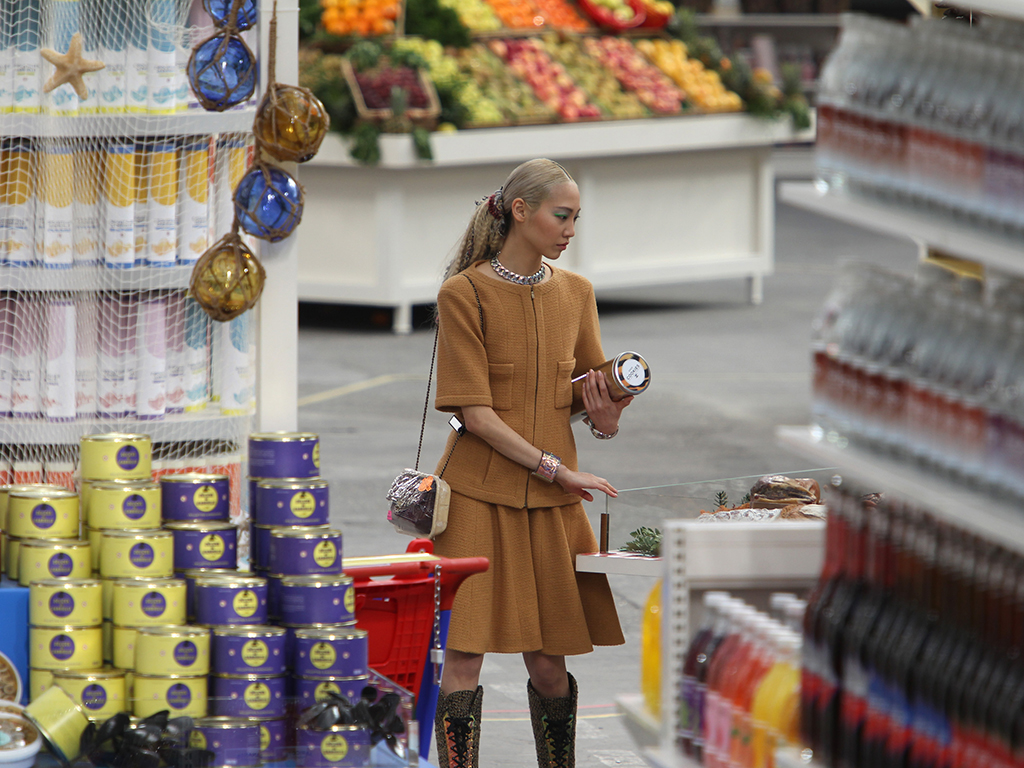 At the midpoint of this year’s Paris fashion week, the Grand Palais played host to a pop-up grocery store, pioneered by Karl Lagerfeld and complete with wine, water and even tissues, all marked with Chanel’s iconic double ‘C’ logo. However, the makeshift shopping aisles were sparsely populated by select individuals showcasing Chanel’s latest threads to a few lucky onlookers.

This elaborate installation was in fact set up to promote the fashion house’s Autumn-Winter 2014/15 women’s ready-to-wear collection, representing an exciting departure from familiar runways and warehouse settings. More importantly, the set up – accidentally or otherwise – illustrates the growing influence of the consumer in today’s fashion affairs.

The switch to commercialisation has sparked criticism, with many quick to label fashion week as a dolled-up sales pitch. However, although the event has changed remarkably since its nineteenth-century beginnings, the transformation has been brought about by factors outside of the participants’ remit and the overriding focus on design has remained largely unchanged.

Fashion for the masses
Before the weeklong event existed, it was the French capital’s salons that showcased fashion, beginning with Charles Frederick Worth who in 1858 pioneered the concept of the fashion show when he exhibited a pre-prepared collection of designs to his high-society clients. Not content with this idea, Worth became the first to have women model his clothes – a previously unheard of concept.

[F]ashion week is not merely an opportunity for luxury brands to exhibit their upcoming collections to consumers, but a celebration of design and a chance to inject an element of theatre into fashion

A decade on, Worth created the Chambre Syndicate de la Confection et de la Couture pour Dames et Fillettes (crudely translated: ‘The association of the garment and sewing for women and girls’), a trade association whose principal aims were to prevent designs from being copied, and to promote the French fashion industry. However, the organisation is best known today for pioneering and legally regulating the phrase haute couture, which was then restricted to its own registered members.

By the twentieth century, the French capital had cemented its reputation as the global hotspot for all things fashion; the international community began to look to Paris for the latest trends and designs. With this reputation came more exuberant shows, then dubbed fêtes, which reeled in the world’s fashion press and gathered mainstream interest. This marked the start of perhaps the biggest change to the idea of a fashion show, as wider attention brought with it mass-market appeal, and an opportunity for designers to cast their nets wider than ever before.

Welcome to Press Week
The nature of the industry transformed a few decades on, when WWII and the Nazi occupation of France made access to the fashion capital impossible for the international community. The circumstances, far from bringing the industry to a standstill, gave rise to one of fashion’s greatest names and the beginning of fashion week as we know it.

Indiana-born fashion publicist and museum director Eleanor Lambert marked a turning point for the industry when in 1943 she announced that Press Week was coming to New York. It was at the esteemed Plaza Hotel and at the height of the Second World War that Lambert organised the city’s first fashion week. American consumers had looked to Paris for inspiration, and Lambert saw the circumstances as an opportunity for US designers to exhibit, independent of Parisian influence. For the first time, journalists were invited to sit in on the catwalk, and the 53 participating designers transformed international perceptions of American fashion.

The following half-century saw Milan, Paris and London follow suit with their own fashion weeks. Far from its origins in Worth’s salon, fashion week is no longer presented to customers, but to press and buyers, who are given ample time to compose their coverage and collections in advance of the season ahead. This system has provoked criticism from some, who see the fashion week cycle as nothing more than a factory for churning out consumer products. Moreover, critics claim the regime leaves little time for designers to dream up inventive ideas, resulting in a dearth of creativity.

Necessary sacrifices
However, fashion week is not merely an opportunity for luxury brands to exhibit their upcoming collections to consumers, but a celebration of design and a chance to inject an element of theatre into fashion. Today, each of the big four fashion weeks attracts torrents of enthusiasts, photographers, journalists and socialites alike, and the event’s significance can so often get lost in the tumult.

The transformation of the fashion week and its increasingly consumerist tendencies are not a reflection of the industry’s departure from design and its surrender to capitalism, as many would have you believe. Rather, the changes are a consequence of an ever-expanding consumer base and the digital age, which together mean fashion week can be observed and commented upon by anyone with a laptop.

There is truth in the statement that fashion week has become a far more consumer-orientated affair, but the changes have resulted in an event that is less exclusive and more accommodating for consumers. This, surely, can be no bad thing. Granted, the sets have become more elaborate and the sponsorship deals more lucrative than ever before, yet the underlying principle of fashion week remains – design is still the most important factor of all.