A cloak-and-dagger style gentleman with a string of success stories, which he isn't willing to tell himself 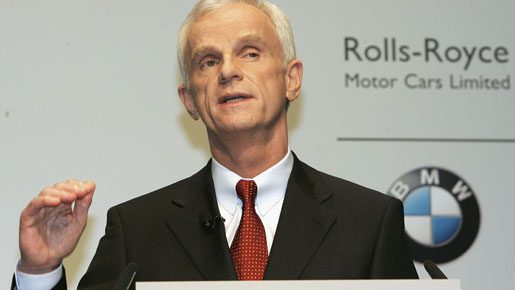 An intensely private man, Helmut Panke has told curious journalists that details of his personal life, like his habit of jogging in the morning or what he had for breakfast, are not important. True, but if we can believe reports that his taste in music includes REM and U2 as well as Haydn and Bach, we begin to understand a little more about the man whose leadership brought great success to BMW, and who is currently the only member of the Microsoft board of directors from outside the US.

We also know that Panke is an emotional man, and his respect for his emotional side has, in part, driven his career. In a fascinating interview with Larry Larsen of Microsoft, Panke describes how he chose to study physics at the University of Munich and later begin his career as a researcher. He had, he explains, a great lab course experience while on an exchange program to a secondary school in the US. When it came time to choose his university course a year later he was torn between studying physics, which had been the basis of his great exchange experience, or business.  In the end, he decided to go with his ‘tummy’, and chose physics.

This led to the first of what he refers to as his four-stage career. Panke earned his doctorate in nuclear physics and joined the Swiss Institute for Nuclear Research where he spent his time looking at “what makes the world go around inside a nucleus”. Following two years of research and lecturing at the University of Munich, he embarked on stage two of his career when he was invited to join McKinsey & Co as a trainee consultant, helping clients to prioritise their research and development programs.

One of his clients was BMW, and in 1982 Panke embarked on stage three of his career when he left McKinsey to join BMW as head of planning and control of the research and development division. What attracted him to the company, he said later, was the reputation BMW had for encouraging creativity and independence among their staff.  He also felt there was a good personality fit. “My scientific background gave me good analytical skills,” he says, “and I am an emotional person. BMW must also combine the elements of technology and emotion to create the ultimate driving experience.”

Over the next 20 years Panke worked his way up through the organisation, eventually gaining direct experience in nearly every department. He headed up the US manufacturing facility that he was instrumental in building, as well as corporate planning, organisation, personnel, information technology, finance and sales. By 2002, when the then chairman of the board Joachim Milburg resigned early due to ill health, Panke was the obvious choice to take over the role.

As chairman, he focused on building flexibility into BMW’s manufacturing operations in order to provide customers, whom he referred to as ‘investors’, with the opportunity to design their own interiors. Panke understood that the strength of the BMW marque was its focus on high end performance and luxury, and he refused to move into the lower priced mass market (it is widely believed to have been Panke’s decision to sell the UK Rover Group for £10). As a result, BMW had the highest profit margins in the industry.

He is also credited with spearheading the company’s growing internationalisation. Panke had been the leading figure in setting up the BMW plant in South Carolina, USA, and in May 2004 under Panke’s leadership BMW opened a factory in Shenyang, Liaoning province, China while laying plans for the establishment of another plant in India. Today, the BMW Group maintains its own production facilities in 12 countries and its own sales companies in 37 countries.

Behind his success is a unique management style. He was known to be outgoing and very supportive of his managers. His great enthusiasm for BMW’s automobiles helped attract promising young talent as did his ability to retain the BMW culture of maintaining creativity and allowing employees the freedom to make decisions. He had two great maxims, often quoted: “Mercedes is the perfect competitor…if there was no Mercedes, we would have to invent it”; and “Rule 7 [of the BMW code of corporate behaviour] states that it’s the responsibility of any manager to create an atmosphere of fun in the organisation”.

By 2006, the year he turned 60 and was obliged to retire from BMW, the company was reporting plans to achieve a record profit before tax of €4bn, making it one of the most profitable companies in the industry. However, according to the rules, senior managers in many leading German companies were expected to retire to make way for younger talent. Shortly after taking over as Chairman of BMW, Panke had already begun to accept nominations to the boards of leading international companies, in preparation for stage four of his career.

In 2004, he was appointed to the board of the software giant, Microsoft. “As our first director from outside the United States, Helmut will bring a valuable global perspective to our board,” said Bill Gates, Microsoft chairman and chief software architect.

Panke sees his contribution to all his board positions as one of strategic focus. “You must always know what you stand for,” he told Larsen. “As a leading company you make a promise to your end user of what your brand represents. Everyone in the organisation has to understand what the promise is, and focus on fulfilling it. Once it is broken even once you begin to lose your way.”