John Cryan will soon become the sole CEO of Deutsche Bank. If he is able to turn the German banking giant around, it could be a career-defining achievement 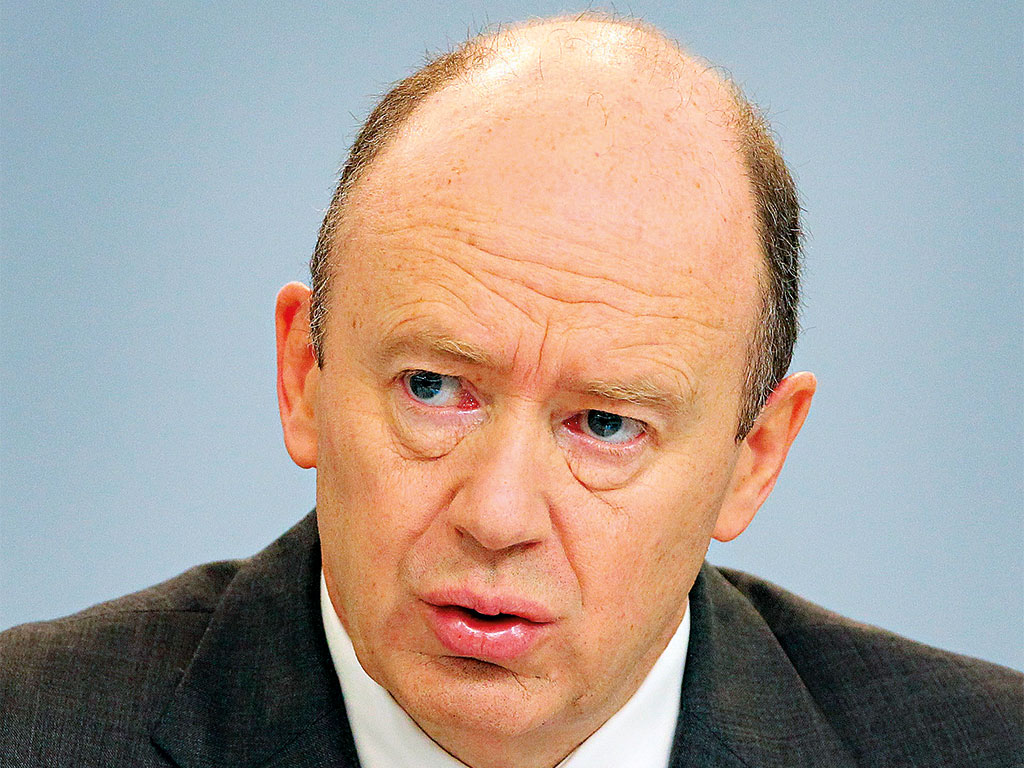 Speaking at the World Economic Forum, Deutsche Bank’s co-CEO speculated that in 10 years’ time cash, in its physical form, would no longer exist, as there will be no need for it. Commentators and business observers quipped that perhaps cash had already ceased to exist in his bank, considering its poor performance. The comment’s response underlined the formidable task John Cryan has ahead of him.

Cryan, a former UBS banker, took over from Anshu Jain as co-CEO of Deutsche Bank on July 1 2015. The bank has had a troubled few years. Cryan was taken on due to being seen as someone who can get the bank back on the straight and narrow, and introduce profitability once again. How successfully he carries out this task is likely to be with him for the rest of his career, and ultimately forge his reputation. Upon assuming his position, the British businessman recognised the immense challenges his new employer, and now he himself, faced: “Our challenges are… evident in the unacceptably high level of our costs, our continuing burden of heavy litigation charges, a balance sheet that must be more efficient, and the poor overall returns to our shareholders.”

Prussian panic
Deutsche Bank seems not to have had a good start to 2016. Germany’s biggest bank, in a press release published on January 28, announced a €2.1bn loss for the fourth quarter of 2015 and a total net loss of €6.8bn for the whole year. This was Deutsche Bank’s first full-year loss since the 2008 financial crisis. Added to this has been a recent hammering by markets and investors. Since October 2015, the value of the bank’s stock has tumbled by 50 percent. The week starting February 8 saw panicked selling of many European bank shares, with Deutsche Bank being among the worst hit – seeing its stock prices fall by nearly 10 percent.

Furthermore, there have been market jitters around Deutsche Bank’s contingent convertible bonds which were being traded at 75 cents on the euro. Credit default swaps (CDS) reached levels not seen since the 2012 crisis in the eurozone, when the whole financial system in Europe was in doubt. The cost of a CDS for Deutsche Bank bonds has doubled since the end of 2015, reaching 438 basis points. All of this suggested a fear that Deutsche Bank may not be able to pay its coupons to bond holders when due in April 2016, or perhaps even in 2017.

One could conclude, on this basis, that Cryan, appointed in 2015, was failing in his task of overseeing the bank. However, that would be mistaken. The above poor performance should be viewed in context. When Deutsche Bank saw its stock value fall by 10 percent in a single day, other banks also saw rallies on their prices. Barclays, BNP Paribas and UniCredit all tumbled by five percent during the same trading period, while the Euro Stoxx 600 fell by six percent, closing at 5.6 percent – again, levels not seen since the peak of the eurozone financial crisis in August 2012. Other banks’ contingent convertible bonds also saw declines. European banks in general have been hit hard by markets and have seen declining profitability.

Despite much commotion about the huge profits that bankers are raking in, it is widely recognised that the biggest systemic risk facing the financial sector is a chronic profitability crisis in Europe. This largely stems from the persistent regime, set by the ECB, of low interest rates and negative deposit rates. At the same time, many banks in Europe are feeling the pinch as the deadline for new capital requirements – set to come into effect in 2019 – looms large. Added to this are continuing fears about the outlook of the global economy, with Europe being no exception. In particular, the prospect of the European economy’s fragile recovery failing to come to fruition raises fears about the large number of bad loans on which banks are sitting.

Seasoned campaigner
Of course, Deutsche Bank stands out from the rest – it saw the largest market slide of all, suggesting it is faring worse than other European banks. Added to general fears of profitability among all European banks are two factors specific to the German giant. Firstly, Deutsche Bank is still reeling from heavy financial losses due to litigation from various cases of wrongdoing. With the size of some litigation fees still undetermined, the ability of Deutsche Bank to cover such costs while still turning a profit is in doubt. Second, and related to this, is the fear that the current reorganisation of the bank, under the command of Cryan, could hamper profits.

In the short term, this may be true. However, after years of wrongdoing and poor profitability, Cryan’s attempt to get the bank back on track needs time. The co-CEO has not shied away from noting that it will bring short-term pain: “I do not think that 2016 and 2017 will be strong years”, he is reported to have said. Cryan appears to understand the necessity of the task ahead, as well as the pain it will bring at first. To this end, in late 2015 he unveiled his plan, named Strategy 20/20, which aims at restoring profitability and confidence in the bank within the next few years. Few who know his record would doubt that Cryan has the experience to power through this task.

Cryan was made co-CEO alongside Jürgen Fitschen in 2015, after Anshu Jain vacated the role. A Cambridge graduate with a long career in finance, Cryan has earned a reputation as a tough-minded businessman. “[He] has a reputation as a ruthless cost-slasher”, noted The Economist. Furthermore, he has gained a reputation for turning troubled banks around. Between 2008 and 2011, he helped restore the credibility of UBS, where he advised the board on the financial crisis.

Cryan has also served as a non-executive director on Deutsche Bank’s supervisory board since 2013, meaning he knows the bank and its troubles inside out. Helpfully, he speaks fluent German – something his predecessor Jain struggled with, often leading to difficulty communicating with investors.

Setting the strategy
The key way in which Cryan hopes to get the German banking giant back on the right path is through his Strategy 20/20 plan. This plan has four major parts: making operations simpler and more efficient, reducing risk, increasing capitalisation, and improving how the bank is run, with more disciplined execution. The first part of the strategy is to cut both clients and employees. The bank, while based in Germany, has a vast international presence. As part of the effort to make the bank simpler and more efficient, it will be withdrawing from 10 countries: Argentina, Chile, Mexico, Peru, Uruguay, Denmark, Finland, Norway, Malta and New Zealand. Regional hubs will handle business in these locations.

Jobs are also set to go as part of the vision for reviving the bank. Over the next one to two years, up to 35,000 jobs at the bank will go. Around 30 percent of these job losses will come from Deutsche Bank’s in-house workforce, totalling around 9,000. Up to 20,000 additional roles will also be slashed through the disposal of assets, while 6,000 external contractors will also go. The plan will also see the bank reduce its number of clients in global markets, particularly in countries deemed high risk. This can be seen as part of the strategy’s attempt to cuts costs as well as reduce risk. The bank also hopes to improve its capitalisation by slashing risk-weighted assets. The plan also includes the tough decision to pay no dividends until 2017.

Cryan has stood out among the heads of high finance in his criticism of bonuses. At a conference in Frankfurt in late 2015, he said that he had “no idea why I was offered a contract with a bonus in it, because I promise you I will not work any harder or any less hard in any year, in any day because someone is going to pay me more or less”. He went on to attack the financial sector’s reliance on bonus pay, saying that he had “never been able to understand the way additional excess riches drive people to behave differently”.

The winding road
Deutsche Bank has a long history. It has weathered major crises before, and should be able to again. While the firm may be reeling from past mistakes and the birth-pangs of the current restructuring, as John Cryan recognises, it is absolutely vital to push forward with the tough plan. Furthermore, Cryan has shown leadership in attempting to get in front of any gloomy news from the market. In response to the recent sell-offs, Cryan was clear and resolute on the future of the bank, communicating a message that the capital requirements of the bank were “absolutely rock-solid”. Concerns over the bank’s supposed inability to pay coupons on its CoCo bonds were placated. Cryan reassured markets of the bank’s “capacity and commitment to pay coupons to investors who hold our additional tier-one capital”.

These statements were part of a message delivered by Cryan to employees. In the face of concerns over transparency at the bank following the recent market scare, he told employees: “When I first became your colleague and co-CEO seven months ago, I promised to increase communication from the management board to you. I made clear that when we had something to communicate, I wanted you to hear about it first from us. That is why I am writing to you today.” Starting from May 2016, Cryan will become the sole CEO of Deutsche Bank, as Jürgen Fitschen is departing. The road to restructuring and cleaning up the German financial institution will be long and rocky – but it is the only option. Hopefully Cryan and his Strategy 20/20 plan can ensure the bank successfully makes it to the end.