When he took over as CEO of Axel Springer AG in 2002, the company was facing testing times. In 2001 it faced losses of just under €200m. Ten years later, things aren’t quite so daunting 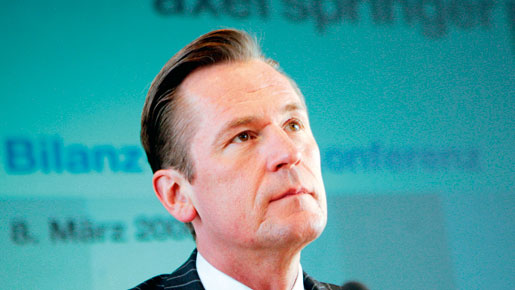 Döpfner’s academic career was varied, but his professional career had a solid grounding in the publishing industry. In the 1960s he had been a student of musicology, German literature and theatre science in both Frankfurt and Boston. He began his career in 1982 as the music critic of the Frankfurter Allgemeine Zeitung supplement. Having worked as the FAZ correspondent in Brussels and as manager of a subsidiary of the Winderstein concert agency, Döpfner moved to publishing house Gruner + Jahr in 1992, and at first working in Paris, but later becoming assistant to the then CEO, Gerd Schulte-Hillen.

Through the looking glass
Following this success, Döpfner was made a member of the board of directors of Axel Springer in 2000, at the same time assuming responsibility for the company’s overall newspaper publishing division. Upon his appointment, Döpfner’s priority was to transform the group from a loss-making to a profitable business. Döpfner saw that consolidation was the key to achieving this aim, and he instrumented the sale of a number of non-profitable subsidiaries in order to focus on the company’s core business. One of these initiatives was the controversial merger of the editorial offices of Die Welt and Berliner Morgenpost.

As a result of these measures, in 2002, Axel Springer had begun to make a profit once more, and not only did this result in his appointment as CEO, but it would also prove to be a springboard for further successes in future years. The main axis of this springboard was Döpfner’s pursuit of a strategy that embraced digital media. This involved the development of a couple of Axel Springer’s market-leading content portals, such as with BILD.de and the European women’s portal auFeminin. As part of this strategy, Axel Springer’s core classified advertising business was also rolled out via digital channels. As a result of this strategy, Axel Springer took a strong foothold within several European internet portals, including the job website Stepstone, the real estate portal Immonet and the price-comparison marketplace Idealo.

Good things come in threes
Another way in which Döpfner sought to break through the barrier of traditional publishing and into the digital era is through performance-based marketing. In 2007, Axel Springer, together with PubliGroup, acquired performance advertising network Zanox, before again teaming up to purchase a majority shareholding in Digital Window in 2009. The latest of these transactions, in 2010, saw Axel Springer take over Buy.at, a subsidiary of AOL.

As a result of these deals, within the space of three years and three deals, Döpfner managed to position Axel Springer as the European market leader in the performance marketing sector. In a dramatic market shift, approximately 25 percent of the company’s total revenues were generated thanks to online sales – a statistic that   remains today.

Brave new media world
Since 2009, Döpfner has tried to create two new cornerstones for the business; firstly providing collated information under a well-respected and well-recognised brand, and secondly providing creative marketing solutions across all forms of media, from traditional print, through online to mobile content.

Going forward, Döpfner’s aim is to roll-out this technology across new markets, with particular focus on central and eastern Europe. To this end he has established a joint venture with Ringier AG, creating the brand name of Ringier Axel Springer Media, which publishes some of the leading tabloid newspapers in Poland, the Czech Republic, Hungary, Serbia and Slovakia.

Today, Döpfner is probably one of the first European CEOs to have influenced the direction of the media market, having advocated and advanced all types of digital media, most notably the provision of paid content in digital distribution channels across new smart phones and tablet technology.