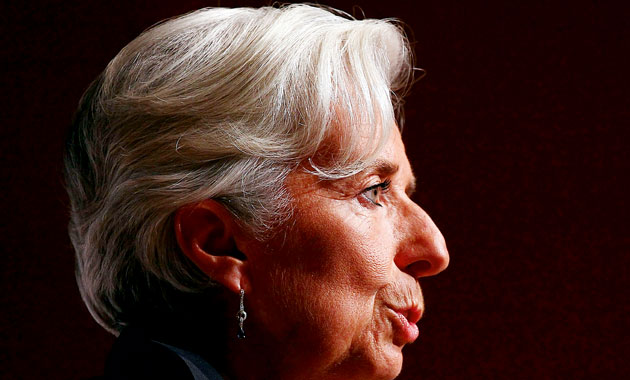 Despite being described by one admirer in the banking community as having “rock star-like qualities”, IMF Managing Director Christine Lagarde has never been one to let status or natural charm get in the way of straight talking. And with a re-run of the 2007-09 credit contraction looming ominously as economic conditions around the eurozone continue to deteriorate, straight talking carries even greater weight than usual.

While Lagarde is unlikely to be forced out of her job – unlike her predecessor, Dominique Strauss-Kahn, who resigned in May 2011 amid sexual assault allegations – she isn’t without baggage of her own.

An issue remains with her role in a 2008 damages award, involving a dispute between French business tycoon Bernard Tapie and Crédit Lyonnais. Lagarde, France’s Finance Minister at the time, ordered the dispute between Tapie, the one time President of Olympique de Marseille football club, and eventual close ally of Nicolas Sarkozy, Crédit Lyonnais, to be referred to an arbitration panel.

Tapie had purchased sportswear company Adidas for the equivalent of €244m in 1990 via a loan arranged through a Crédit Lyonnais subsidiary. In 1993, and facing financial ruin, he sold the company to a group of investors (including Crédit Lyonnais) led by Robert-Louis Dreyfus for €315.5m. As part of the deal, Crédit Lyonnais assumed a 19.9 percent stake. Dreyfus then took full control in 1994 for €701m – almost twice as much as Tapie had sold it for. Tapie cried foul and decided to sue.

A Paris court in 2005 ordered Crédit Lyonnais and the French government to pay Tapie €135m in damages – a judgement subsequently overturned in 2006 by the Cour de Cassation, France’s court of last resort. Ordinarily, the case would then have been sent down to a lower court for the judgement to be rubber-stamped. Unusually for a case involving a public entity (Crédit Lyonnais had been under majority state ownership in the early 1990s), Lagarde opted to refer the case to a private arbitration tribunal which, in 2008, awarded Tapie €285m in damages.

Lagarde has consistently denied any wrongdoing, including abuse of public office. Indeed, her supporters have claimed that, far from costing French taxpayers a substantial amount of money, she has actually saved the public purse by not contesting the award, thereby ensuring the case didn’t continue to drag on.

Assuming there are no skeletons yet to come out of Lagarde’s closet, the case is unlikely to impact her tenure at the IMF, given the organisation was well aware – before her election – about the possibility of an investigation (now in progress) which could yet take years to conclude.

A safe pair of hands
When she took the helm at the IMF in July 2011, many at the time saw her as a safe pair of hands for the organisation, given her proximity to negotiations as the eurozone crisis unfolded. They still do.

It is also a measure of the esteem in which Lagarde is held that she emerged from one of the most hotly contested elections in IMF history amid misgivings in many quarters about upholding the tradition of having a European head the IMF and an American leading its sister institution, the World Bank.

Lagarde didn’t disappoint her sponsors, being quick off the mark to press Greece to push through unpopular austerity measures, arguing they were a prerequisite for further IMF and EU aid. While the Greek tragedy continues to play out, EU leaders have signed-off on creating the European Stability Mechanism (ESM), a €500bn permanent bailout fund due to become operational in July; 12 months earlier than originally anticipated.

However, reports of the EFSF’s demise may yet prove premature – FT Deutschland suggested in a recent report that Europe could eventually end up with a ‘super’ €1,500bn debt firewall by combining the ESM (€500bn), EFSF (€500bn) and a €500bn IMF lending facility – of which the 17 eurozone countries have already agreed to provide €150bn in bilateral credit for. The remaining €350bn would come from countries outside the eurozone.

Bailout drive
The latter fund will only see the light of day – however – when Germany agrees to it. Lagarde’s line has consistently been that by boosting the size of the eurozone ‘firewall’ it will convince others to contribute more resources to the IMF, thus bolstering its crisis-fighting abilities and improving market sentiment.

Behind this there is the underlying message of ‘no pain, no gain’, not only for Greece, but also elsewhere, if the Greek rescue is to be used as a template. Debate will continue to rage over whether Greece represents the eurozone’s rotten core, or is merely part of a wider rotten whole. In the meantime, Greeks at the sharp end will endure a major dip in living standards, while Europe’s private sector potentially faces a hit as recession takes hold and banks tighten credit.

After three straight years of negative economic growth and an unemployment rate of 20.9 percent, Greeks don’t need reminding what economic austerity means. And the pain won’t be ending any time soon, with monthly minimum wages set to be slashed by 22 percent to €600 as a requirement for a €130bn bailout package agreed to between its EU partners and the IMF and signed-off by the Greek Parliament. Greece will also be expected to slim down its public sector by 15,000 workers immediately; 150,000 workers by 2015, and cut supplemental pension benefits paid to retirees. The package also provides » for a bond swap to ease the nation’s debt burden by cutting the real value of private-sector investors’ bond holdings by some 70 percent.

If Greece represents the centre of the economic firestorm, that is not to say conditions aren’t deteriorating elsewhere – Switzerland’s Petroplus Holdings being symptomatic of a wider malaise.

Facing dwindling margins, due to high oil prices and weak economic conditions, Europe’s largest independent oil refiner confirmed in January it was filing for insolvency after creditors – led by BNP Paribas and Credit Suisse – demanded repayment of $1.75bn of outstanding debt. Self evidently, the ‘too big to fail’ myth was again exposed as banks concluded the sovereign debt crisis was a more important issue to address.

This came despite the European Banking Authority having already warned banks not to cut lending or inflate capital levels artificially, while ordering the region’s financial firms to raise €114.7bn – principally from investors and retained earnings. Lenders were told to bolster their Core Tier 1 capital ratios to more than nine percent of risk-weighted assets by the middle of this year in a move aimed at soothing investor fears they wouldn’t be able to withstand the ongoing debt crisis.

Refinancing debt
In truth, banks are using the Basel III Capital Adequacy Framework as an excuse to hoard cash, which will have major repercussions on the private sector across Europe.

Against this backdrop, the ECB’s €489bn credit infusion into Europe’s financial system back in December 2011, through the provision of three-year loans (to replace shorter-term ECB borrowings) to banks at just one percent, at least staved off a continent-wide credit crunch for now; longer term, the jury is still out.

While a sizeable chunk of money (€296bn, according to an estimate from Barclays Capital, based on ECB data) was used by the 523 banks utilising the ECB’s Long Term Refinancing Operation (LTRO) to repay existing loans from the ECB, the remainder found its way back to the central bank on deposit – undermining the theory, for now at least, that banks would use the facility to continue lending to businesses. And with banks accounting for an estimated 80 percent of lending in the euro area, this was not a desirable development.

But are these developments surprising? In its December 2011 Financial Stability Report, the Bank of England said euro-area banks need to refinance over €600bn of term debt in 2012, with the majority maturing in the first half of 2012. That represents around 35 percent more debt than was refinanced in 2011. Around three quarters of maturing funding in 2012 is unsecured.

In a February note, Barclays Capital said that despite LTRO being crucial in improving the immediate credit landscape, latest available information was signalling a substantial contraction in credit conditions, with tighter lending standards that could lead to a notable increase in corporate default rates, with a twelve-month lag.

“Rather unsurprisingly there was a substantial tightening of credit demand as well. More importantly, a majority of this contraction in demand comes from a reduction in fixed investments, which clearly has implications for profit margin expansion,” it said.

In fact, the rot may already be setting in; the ECB’s latest (January 2012) quarterly bank lending survey of 124 euro area banks shows credit tightening, and the balance of banks reporting tighter conditions vs. those reporting looser ones has climbed to a net +35 percent from +16 percent the previous quarter.

For loans to households the corresponding numbers were +29 percent, up from +18 percent and for consumer credit, +13 percent, up from +10 percent. Looking ahead, those questioned expect a further net tightening of credit over the next three months, albeit at a slower pace than in Q4 2011. Banks explained the net tightening by the adverse combination of a weakening economic outlook and the euro area sovereign debt crisis, which continued to undermine the sector’s financial position.

Indeed, sovereign market tensions had led to a deterioration of their funding conditions through balance sheet and liquidity management constraints. Tightening appeared to be widespread across larger euro area countries, with the notable exception of Germany. That said, some parts of the banking system were in a position to shield their lending policies from the impact of the crisis.

On the demand side of the equation, loans for corporates again fell as companies continued to scale back their investment plans. However, the net decline in loan demand for NFCs (non-financial companies) decelerated to –5 percent, compared with –8 percent the previous quarter. Meanwhile, Christine Lagarde continues to hammer home the message that action is required now.

A year of healing
Addressing the German Council of Foreign Affairs in Berlin in January she called on the international community to take urgent collective action to save the world economy from a downward spiral, arguing that the longer nations wait the worse it will get. “Looking at it from this perspective, 2012 must be a year of healing,” she said.

Laying out the main elements of a policy path going forward, she said that Europe, which is at the centre of global concerns, needs stronger growth, larger firewalls, and deeper integration. But she added that other economies also have an important role to play in restoring balanced global growth. Without a larger firewall, countries like Italy and Spain that are fundamentally able to repay their debts, could potentially be forced into a solvency crisis by abnormal funding costs – a development she warned would have disastrous consequences for systemic stability.

“Stronger growth also means preventing banks from going into reverse gear, contracting credit in the face of market pressure. Solutions should focus on raising capital levels – rather than cutting back lending – as the way to boost capital ratios,” she said.

In a wider context, Lagarde also called on both emerging and advanced countries with large current account surpluses to encourage more domestic demand as a way to support global growth. China, in particular, could help both itself and the global economy by continuing to shift growth away from exports and investment, toward consumption.

“We must all understand that this is a defining moment. It is not about saving any one country or region. It is about saving the world from a downward economic spiral,’’ she said. As Europe’s policymakers continue to grapple with a sovereign debt crisis and the possibility of another recession, the coming months will see whether they’re up to the task. Don’t hold your breath.