Toyota Motor Corp could face an unprecedented recall of eight million cars over problems with sticking acclerators in the biggest ever blow to the reputation of the world’s largest auto maker. The recall and related sales suspension in North America have dented Toyota’s once unshakeable record for safety and reliability and come as its grapples […] 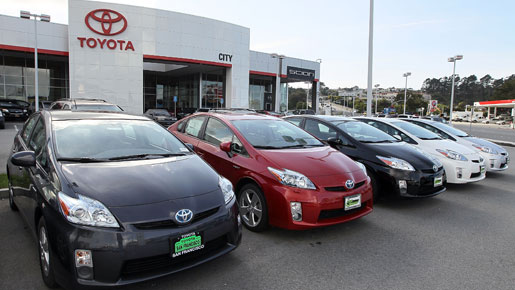 Toyota Motor Corp could face an unprecedented recall of eight million cars over problems with sticking acclerators in the biggest ever blow to the reputation of the world’s largest auto maker.

The recall and related sales suspension in North America have dented Toyota’s once unshakeable record for safety and reliability and come as its grapples with a patchy recovery from an unprecented global downturn in the industry and growing competition.

“Toyota’s got the resources to bounce back from this, but this is the biggest crisis that they have ever faced, and Ford and Hyundai and others are coming on strong,” said Jim Ziegler, an auto dealer consultant in Atlanta.

Shares of Toyota fell a further four percent in Tokyo trading on Thursday, taking losses since last week to more than 15 percent, wiping about $25bn in value from Japan’s largest company by market capitalisation.

Toyota said late on Wednesday that it would also offer to voluntarily fix another 1.1 million vehicles that may face a risk that floor mats could trap accelerator pedals and cause bursts of sudden acceleration.

Taken together, Toyota would be recalling nearly six million vehicles for accelerator-related problems across its lineup, a sweeping safety action that has emboldened its rivals.

A recall could expand into Europe as well, where the same pedals are used for some models. Japanese media have reported the company is considering recalling two million vehicles there.

That would take the total number to eight million, almost the same as its group global sales last year.

A Toyota spokesman in Tokyo said the automaker would consider whether it needs to issue a recall in Europe. But even if Toyota issues a recall, it will not have to suspend sales and production there as the parts are not already used, the spokesman added.

Cars sold in Japan do not use the parts in question.

Rivals benefit
Analysts said the financial damage to Toyota from the recalls would depend on how long it has to shut production on key models and how badly consumer confidence is shaken as reflected in pricing of both new and used cars.

Battered by a plunge in global sales brought on by the financial crisis, Toyota was expected to post an operating loss of around 47bn yen in the year to March 2010, before rebounding to a 599bn yen profit in 2011, according to 19 a recent poll.

“I am expecting 100bn to 200bn yen in operating profit this year, but it could end up in zero or a operating loss due to this sales and production suspension,” Endo said. “I suppose Toyota would suffer more next year because of a damage on its brand image.”

Fitch said it was putting Toyota on watch negative.

“The recalls and sales and production suspension cast a negative light on Toyota’s reputation for quality, just as the company emerges from an unprecedented downturn in the auto industry,” said Jeong Min Pak, Senior Director in Fitch’s Asia-Pacific Corporates team. “This could hamper the company’s potential sales and profitability recovery, especially in the US market.”

“Honda, Nissan and Ford Motor stand to benefit if Toyota experiences a prolonged sales slump,” Kota Yuzawa, auto analyst at Goldman Sachs in Tokyo, wrote in a memo to clients.

Looking to gain from Toyota’s slip, General Motors Co said on Wednesday it was offering Toyota customers payouts of up to $1,000 or zero-percent financing for up to five years on most of the GM line-up.

Major US car rental agencies pulled Toyota vehicles from their rental fleets, while shares of US parts suppliers tumbled.
‘Devastating blow’
The most recent troubles for Toyota began on Tuesday when it said it would suspend sales in the United States of eight models, including versions of its top-selling Camry sedan made in North America.

Toyota is also halting production at six plants in the United States and Canada for the first week of February.

Toyota said this week it expects a six percent rise in groupwide global sales to 8.27 million units in 2010, but according to a company spokesman in Tokyo, the outlook does not take this sales suspension into account.

“It’s a devastating blow to Toyota and Toyota’s reputation,” said Dennis Virag, president of the Automotive Consulting Group. “Toyota is the new General Motors in terms of experiencing quality glitches, over-expansion and the proliferation of new product models.

The production halt comes at a time when major automakers are ramping up output as the US industry  recovers from its worst downturn since the recession of the early 1980s.

These are also critical days for Toyota management. Akio Toyoda, grandson of Toyota’s founder, took over as president of the automaker in June with a vow to address missteps in the US market and elsewhere.