Aurora Eastwood reflects on an impressive historic racing event from last year, and looks forward to many more in future 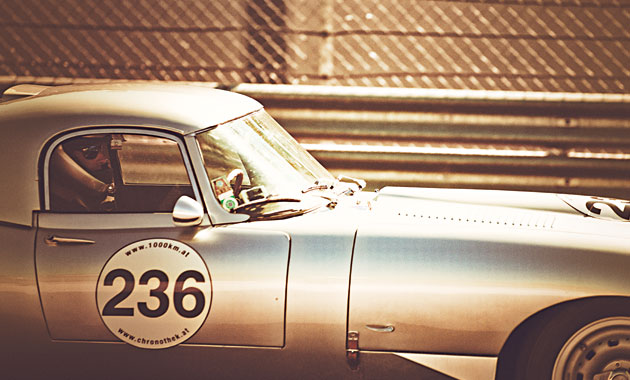 Humans are intrinsically competitive creatures. Travelling from one location to another for many isn’t enough; it must be done at warp speed, and if it involves beating somebody else in the process, so much the better. It all started when a third party became involved in the locomotion process – which for many thousands of years was the horse. The Romans were aficionados of chariot racing, and the British found other ways of getting an adrenaline rush on horseback – from hunting, steeple chasing was born, and flat racing was nothing new by that stage. And then came the invention that changed everything: the internal combustion engine. Connected via prop shafts and drive shafts to a pair (or more) of driven wheels, the desire for speed and competitive edge has fuelled motoring racing in its various forms for decades.

From the utterly insane racing drivers in the early 1900s, most of whom met horrible but rather spectacular deaths, the desire to push a car, and oneself, to the limit, is a tempting proposition for many. Motor sport has been described as the ultimate adrenaline rush.

All the fun, without the cost
So what is there for those racers who want to compete with like-minded souls, but not spend upwards of $350,000 per season? Historic motorsport. There are many attractive benefits aside from the reduced cost, too: owners can actually prepare and maintain the cars themselves, they are more or less immune to ever-changing FIA regulations (homologation and so on) and there is little issue with the endless modifications and upgrades that plague ‘normal’ motorsport – which usually mean that the driver or team with the biggest budget wins. In short, it’s more intimate, and less overly regulated.

There are myriad competitive options for owners of classic cars, from rallying to circuit racing. One series that has captivated spectators and competitors alike for decades are the 1,000km races. Large race fields competing, often at night, on spectacular race circuits, test the mettle of drivers and machines alike.

The Monza 1,000km races in the 60s and 70s were, at the time, the highlights of the season; more recently, others have become famous – Le Mans being the obvious, most prolific endurance race, with the 24hr race at Spa and the Nürburgring following closely behind.

Most of these races are for modern, hi-tech and vastly expensive racing cars; beyond the reach of most budding racers. However, due to increasing demand for affordable, fun racing, there are classic 1,000km races – and in 2011 a group of enthusiasts in Austria decided that the owners of some rather lovely classic cars were lacking a bit of fun.

They chose the Red Bull Ring. First built in 1969, and used for the Austrian F1 GP for many years, the circuit was then closed and has since been thoroughly modernised (to the tune of $70m) with the best safety record in Austria. It reopened in May 2011, with a round of DTM racing and F2.

And so, a website was built, a date was set, and on October 1st, 2011, the first 1,000km race (dubbed the ‘Ventilspiel’) for historic cars took place at the Red Bull Ring. It had not been easy; the organisers didn’t have a lot of time or much of a budget. It really was a labour of love. They had flyers, stickers and posters made and attended as many historic events and rallies as they could; spreading the word and raising the profile of their exciting initiative.

Motorsport is a tightly regulated area (obviously, for safety) so a plethora of red tape meant that the organisers had to make the event competitive in a different way in order to avoid it; rather than winning on speed, results were calculated on who completed the most laps, rather than first past the post. However, in the absence of a speed limit, some fun could be and most certainly was had.

Perhaps surprisingly, not one car was written off and not a single driver injured – this despite some drivers discovering the limits of their cars (and their own ability) in a manner that they might not have anticipated. The lack of injuries was especially fortunate as the usual FIA safety equipment was not compulsory (as the event was not classed as a race) – so the cars were not forced to be kitted out with roll-cages, fire extinguishers or safety cut-out switches, and the drivers were not required to wear full Nomex race suits, gloves and boots. Helmets of course were compulsory, and cars had to have headlights taped up and be driven with the windows closed. All this helped to keep the costs down – as fitting cars with roll cages and extinguishers will easily exceed $1,000 a time, and a Nomex race suit and accoutrements will also not give much change from $800.

Each class had its fair share of exciting cars or those with extensive history, the highlights being:

Even the pace car had class; a matt green Rolls-Royce on racing tyres. Some of the competitors spoke of their experiences in this inaugural event.

The owner of a car recycling business, Josef has been involved in historic motorsport since 1981, racing in a Triumph TR3. He has an impressive list of illustrious race circuits under his belt: the Nordschleife (Nürbugring), Salzburgring, Goodwood, Le Mans and the Klausen Hillclimb.

“Track days are the best opportunity to find both your own limit and that of the car. A fragile machine like the Riley TT Sprite is a true challenge to drive and takes a lot of getting used to. Managing hot drum brakes and mastering the pre selector gearbox successfully is a hallmark of ownership. Also, you have to make do with no real protection: no doors, no roof and no roll cage. Respecting the special needs of this car was tempered by the reward of the thrilling experience of dicing with a Fiat Abarth 1000TC for most of the event.”

Josef’s message? Be patient and approach the sport with the attitude of a gentleman.

36-year-old car dealer Leo was part of the next generation of historical racers. He used to race an Alfa Sud in hill climbs. Enviably, Leo has driven quite the variety of cars, among them a Pagani Zonda, numerous Lamborghinis and Maseratis, the blinding Ferrari Enzo and even a Koenigsegg CCX. Despite all of those, he chose a small Fiat 128 as his track day car. The simplicity of the mechanics, its light weight and superb handling, together with a lovely free-revving engine (8,000rpm), swayed his decision.

Leo maintains this little car himself. The Fiat was 100 percent reliable and outlasted much more powerful cars on the track, making the Ventilspiel an unforgettable event.

Historically correct to the nth degree, even Leo’s race transporter was an old Fiat truck, exactly as it would have been back in the day.

The Ventilspiel will grow year on year. 2012 sees the classes expanding to include a three-hour team trophy, adding yet another competitive element to the fixture and serving to further whet the appetite of these keen drivers, and no doubt as the years go by, the event will get bigger and better. It has already gone from a one day event to two. Novices have not been forgotten – they can forgo the racing element and simply drive a few laps of the circuit, revelling in the freedom to go as quickly as they like with the benefit of no noise restrictions. What‘s not to like? After all, taking part is much more fun than just watching.