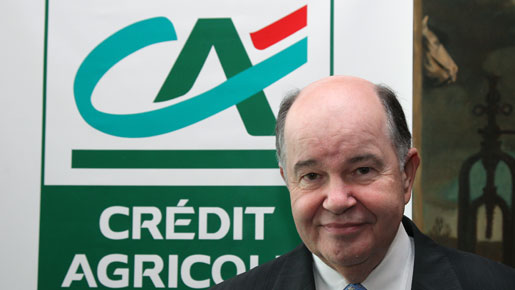 George Pauget, CEO of Crédit Agricole, certainly has his work cut out. France’s largest retail bank – the second biggest in Europe, eighth in the world – saw its profits drop by 77 percent to $272.4m from 2007-2008 as provisions for bad loans more than tripled to $1.5bn over the same period last year and its asset management and insurance divisions also saw a decline in revenues. The results position Crédit Agricole in the middle of the French banking sector; in a weaker position than BNP Paribas but stronger than rivals Société Générale and Natexis, the latter having reported a $2.4bn loss for this year.

Equipped with  a masters and a doctorate in economics, Pauget started out in banking in 1973 at the Aude Regional Bank in the south of France, moving to the Caisse Nationale de Crédit Agricole four years later. Having worked his way up the banking ladder, Pauget was appointed CEO of Crédit Agricole in 2005.

But life is always tough at the top, and for the past two years Pauget has spent much of his time fighting fires in various parts of the business, and with some success. The asset-management division is starting to report inflows once more and Calyon, the investment-banking arm, has undergone restructuring to focus on client business. However, the key area that Pauget is being forced to address now is the bank’s overseas acquisitions portfolio.

Trouble abroad
The problem is that acquisitions are not Crédit Agricole’s forté. If the truth be known, the Crédit Lyonnais deal was a shambles, and its overseas acquisition strategy has proven a mixed bag. In 2006, as prices for banking businesses were approaching their peak, Crédit Agricole spent in excess of €9bn on a string of acquisitions across Europe. And it is not purely by chance that just one of those is proving a real thorn in its side.

This year, Pauget has bailed out Greek bank Emporiki to the tune of $1.5bn. Emporiki, which Crédit Agricole paid $4.8bn for a 60 percent stake just three years ago, has proven a major liability. Emporiki is now valued at just $2bn. Even without a credit crunch or a global recession, paying an estimated 20 times projected earnings for one of Greece’s lesser banks seems excessive. And given that Crédit Agricole’s mutual structure means it has had precious little experience of managing acquisitions in its home market, let alone foreign affiliates.

Crédit Agricole narrowly avoided making an even bigger mistake in 2006, when it pulled out of a deal at the last minute that would have seen the bank acquire UK mortgage lender Alliance & Leicester for €7bn. Since 2006 the book value of Alliance & Leicester has plummeted to such an extent that it was bought by Santander two years later for just £1.33bn. At least Pauget can sleep at night knowing he doesn’t have that liability to work out.

Assets and liabilities
In recent months Pauget has taken concerted steps to redress its structural problems, such as merging its asset management division with that of Société Générale, although it is thought the bank is not about to let go of its 5.8 percent holding in Italian bank Intesa Sanpaolo. Pauget said there was ‘no reason to make hurried asset disposals, we want to manage this stake in a mid-term perspective.’

And this initiative seems to be paying off. Having spent much of 2008 winding down the bank’s structured credit operations, Pauget has managed to contain net losses in the division to €87m in the first half of 2009, including a €465m provision for operations it is in the process of winding up. Net losses for the same period last year amounted to €855m. Looking at the bank’s financial results for 2009, investment banking revenues were below par at €1.51bn in the second quarter, but this performance, partly explained by weaker fixed-income revenues, is in line with other French banks.

At the time the results were posted, Pauget said the bank’s results vindicated its decision to divest some of its more risky operations while promoting other investment banking activities. ‘We see clearly that the path that we’ve determined is a good path and we are confident for the months to come,’ he said. Pauget was also quick to point out that the bank’s corporate and investment banking operations were on track to make net profits from recurring operations of at least €350m per quarter, but the division’s overall return to profit would depend on the return to health of the US housing market and future provisions on its outstanding portfolio of collateralised debt obligations.

In other divisions, retail sales were particularly robust given the recession, up by 5.5 percent in the regional banks in H1 2009 compared to the same period the previous year, a good performance deriving from strong cost control. Whereas Pauget has made some big mistakes, principally in overseas acquisitions but the bank has stood by him and his principles and it looks like they will continue to do so. His ability to make tough decisions and offload heavy loss-making divisions in the midst of a global recession shows he has the ability to steer the bank through troubled waters and the mettle to handle the pressure at the top.