Europe's indebted nations are unlikely to mimic impoverished gentlefolk of old by selling the family silver, or gold, to do so 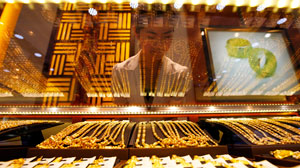 More than 750 tonnes of gold are currently sitting in the state coffers of Portugal, Greece and Spain alone, equal to about 17 percent of the 2010 annual supply of bullion from mining and sales of scrap.

Despite struggling with massive debt burdens and in some cases accepting multi-billion-euro bailout packages, the so-called PIIGS – the countries above, plus Ireland and Italy – have not dipped into their gold reserves to service that debt.

At a time when gold prices have rallied to record highs near $2,000 an ounce, this has raised eyebrows elsewhere in Europe.

And back in May, German politician Frank Schaeffler told Bild newspaper that Portugal should sell its assets. “Before risking other people’s money, Portugal should first sell its family jewels, especially its gold reserves,” he said.

But these demands ignore the fact that this gold is not the property of the PIIGS’ governments to sell.

“Foreign exchange reserves are held and managed by central banks, not by governments,” said Natalie Dempster, director of government affairs at the World Gold Council. “Forex reserves are set aside for specific purposes – defence of currency, payment of external debt obligations and payment of imports.”

“In the past you could have had incidences where governments might try to overstimulate their economies by running exceptionally loose monetary policy before an election,” she said. “That is a reason why it is critical, in an advanced economy, that central banks are independent.”

Two years ago the Italian government’s proposal to tax the unrealised gains on its gold reserves was promptly slapped down by the European Central Bank, which issued a legal opinion to block the plan in July 2009.

The ECB said the move could violate a ban on using central bank resources to finance the public sector, risked breaching the Bank of Italy’s independence and threatened to weaken the country’s finances.

Gold value dwarfed
And while gold prices are at record highs, the gold market is still dwarfed by the size of Europe’s debts.

Between them Portugal, Ireland, Italy, Greece and Spain hold some 3,233 tonnes of gold, worth some €132bn. Their combined outstanding public debt, according to estimates from the IMF, is around €3,289bn.

If Portugal sold every ounce of its 382.5 tonnes of gold, it would only raise some 14.9 billion euros – less than a fifth of a recent EU bailout package.

“The extent of the problem and the holes that need to be filled are so large that the gold doesn’t really provide a solution,” said Philip Klapwijk, executive chairman of metals consultancy GFMS.

“If you look at the value of that resource against what they need to fund in terms of ongoing expenditure and debt issuance, it is not a solution for most of them.”

Italy, the biggest gold holder among the PIIGS and the world’s fourth-largest official sector holder of the metal, has 2,450 tonnes, worth €95bn at today’s prices.

But selling this gold in any volume would probably precipitate a crash in prices and would further undermine confidence in Italy’s ability to manage its finances.

Avenues to be explored
If sales are off the table, there are other ways for gold to be of use to heavily indebted countries. For example, former Italian prime minister Romano Prodi, writing in Italian newspaper Il Sole 24 Ore in August, proposed the creation of a euro bond backed by member states’ gold reserves.

“It has slightly surprised me that some of them haven’t looked harder at some creative uses of gold in terms of gold-backed bonds, which might be a useful way of trying to lower the cost of borrowing,” said GFMS’ Klapwijk.

“But again, they come up against the fact that the scale of the borrowing required is so large that there are probably other ways of trying to deal with the problem rather than using gold. That would probably be a drop in the bucket.”

The financial crisis has made European central banks less, not more, interested in selling gold. Official sector sales were so high in the 1990s that banks united to sign the Central Bank Gold Agreement to limit sales to 400 tonnes a year.

But these sales have since dwindled to only 1.1 tonnes in the current year of the pact, against 404 tonnes 10 years ago.

Gold is increasingly seen as a valuable portfolio diversifier for the official sector and a safe store of value at a time paper currencies are under pressure.

“Spain (and) Portugal sold a lot of their holdings in the past decade,” said John Bowler of the Economist Intelligence Unit. “(While it is) frowned on for the central bank to transfer its assets to the government, I assume that’s what was going on with these sales. It was certainly what happened in the UK.”

Given how badly some European economies are already doing, it would take a brave official to risk a similar move now.