For the World Match Racing Tour, 2010 proved to be a defining year, where the ISAF World Championship was won on the final day of the final event of the season 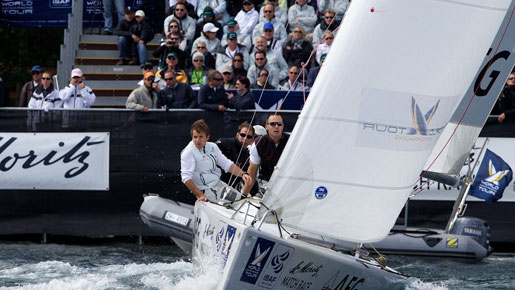 Off the water, the series, which currently hosts nine regattas in Switzerland, France, Germany, Korea, Portugal, Sweden, Denmark, Bermuda and Malaysia, has taken a bold new direction. A new Chief Executive, the appointment of a sales director, the introduction of a global PR campaign and a number of major announcements in 2010 all show a clear statement of intent by Malaysian entrepreneur Patrick Lim since he bought the rights to the series in October 2009.

Lim, who had no prior interest in sailing, was drawn to the business opportunity of the WMRT and used his role as promoter of the Tour’s final event of the season, the Monsoon Cup, to scope its potential. The event has been a huge success since its inception in 2005 – it’s now Malaysia’s second biggest sporting event after the Malaysian Grand Prix; it has a global media reach across networks including Al Jazeera, ESPN and CNN; and from a sailing perspective it was recently given the unequivocal endorsement from Jerome Pels, Secretary General of ISAF – the world governing body of sailing: “If you want to see how to run a sailing event you should come to the Monsoon Cup.”

The model of the Monsoon Cup is something Lim wants to now bring to all other Tour events. So what other key announcements has the Tour made in 2010? Having appointed Jim O’Toole as the new Chief Executive – a man with over 20 years experience working in sports marketing – the Tour’s management unveiled plans to add a further six events to the series by 2013, events for which the Monsoon Cup will be the blueprint. A venue bidding process, which closes on January 31, 2011, has attracted over 50 expressions of interest from regions in Europe, the Gulf, Asia, Asia Pacific and the US. Whichever venues are selected, the Tour will continue to be run in a franchise structure not dissimilar to that which Bernie Ecclestone has so successfully masterminded in F1.

Whilst that process has gathered apace, the Tour also acknowledges the need to keep evolving the product. That means innovating to bring the action closer to spectators (both live and online) with heart rate monitors, virtual eye communications detailing boat speeds and distances and minute by minute commentary. The product also needs to retain the world’s leading sailors and so the Tour also revealed it would be doubling the overall prize pool to $500,000 US in 2011 (taking the total prize money available on the Tour to $1,750,000 US).

Since the series is at the forefront of match racing the boats used need to reflect that position, thus a competition has been launched in 2010 for new boat designs with the winning designs made available for future (or current) Tour venues to use. These boats are being designed to uphold the essence of match racing for which the WMRT is globally renowned – that is close, head-to-head combat sailing.

Perhaps the most important announcement though of 2010 came when the WMRT management was challenged to underline the very position of the Tour within the sport of match racing following the announcement that the 34th America’s Cup would switch from monohull boats to multihulls. It was a defining moment as the Tour has long been the pathway for skippers to compete in the America’s Cup. Commenting on the decision, O’Toole said: “The America’s Cup’s decision to contest the next event in multihulls has reaffirmed the WMRT’s position as the preeminent monohull match racing series.”

At the cornerstone of the new era is the Tour’s belief that a strong business approach will help secure the series’ long term future – from increasing prize money and improving facilities to building the fan experience and attracting the elite of sailing – these will ensure the Tour remains at the pinnacle of match racing.